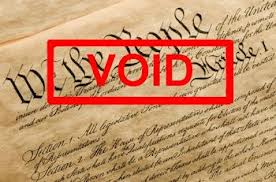 This past Sunday, CBS ran an op-ed segment on its morning show called, “Let’s give up on the Constitution.”   It was written and delivered by Georgetown law professor Louis Michael Seidman.  Professor Seidman gave a longer version of this in print at the end of 2012 in the New York Times.  There, he said, “As someone who has taught constitutional law for almost 40 years, I am ashamed it took me so long to see how bizarre all this is.”  Really, it took 40 years to see the light?  On the CBS version, Seidman said, “I’ve got a simple idea: Let’s give up on the Constitution.  I know, it sounds radical, but it’s really not.”  Really?  It’s not a radical idea when the President of the United States just swore an oath to “uphold the Constitution” in his second term inauguration?  (Click here for the CBS version of Seidman’s op-ed.)  (Click here for the NYT version.)

I don’t question professor Seidman’s knowledge of constitutional law.  What I question is his timing and his new awakening after a “40 year” haze.  I also question the decision CBS made to put this op-ed on the air.  Not because of what was said, but because CBS put this on without any rebuttal.  I wholeheartedly disagree with Seidman’s view, but I am steadfastly in favor of the First Amendment.   To me, CBS is the anti-Constitution network for allowing a radical one-sided view to go unchecked!  After all, it’s not “Freedom of Spin.”   This is how a group of outdated TV stations takes care of the public trust?

As far as professor Seidman, he should be “ashamed” for the sham of being a constitutional scholar for  decades who doesn’t believe in his field of study.  In Seidman’s CBS op-ed, he says he’s “eager to talk with people” about gun control, but if he had his wish, the conversation would start with people having no right to have a gun.  Let’s talk—yeah, right.

Seidman also contends, “This is not to say that we should disobey all constitutional commands. Freedom of speech and religion, equal protection of the laws and protections against governmental deprivation of life, liberty or property are important, whether or not they are in the Constitution. We should continue to follow those requirements out of respect, not obligation.”  Really, the government will take care of our freedoms out of “respect”?  Why isn’t the good professor doing an op-ed about the gutting of the due process clause of the 4th Amendment?  The President can imprison anyone indefinitely and kill U.S. citizens without charge or trial.  (The President ordered execution via drone strikes of three U.S. born citizens suspected of helping al-Qaeda in 2011.)  I guess if you are giving up on the Constitution, those kinds of things are no longer an “obligation” and don’t interest you any longer.  Hey, and nothing is stopping CBS from allowing op-ed pieces or real reporting on any of those subjects either.  Instead, we get “Let’s give up on the Constitution.”

Professor Seidman makes his main point by saying, “This is our country. We live in it, and we have a right to the kind of country we want. We would not allow the French or the United Nations to rule us, and neither should we allow people who died over two centuries ago and knew nothing of our country as it exists today.”  I guess, in Seidman’s 40 years of constitutional study, he just forgot the U. S. Constitution has been amended (or changed) 27 times.   It also appears Seidman doesn’t know much about “. . . our country as it exists today,” either.  Enormous fraud by bankers has gone completely unprosecuted.   There is the $800 trillion LIBOR rate rigging fraud, money laundering for Mexican drug cartels and terrorists, securities fraud, and foreclosure fraud.  Most recently, big banks paid an 8.5 billion fine for illegally foreclosing on millions of homes.  If that’s not a form of tyranny, I don’t know what is.  What world are you living in, professor Seidman?  Crime and fraud destroy confidence and trust in the financial system.  At some point, it will melt down again.  Where are the op-ed pieces for massive fraud and totally unprosecuted crime, CBS and professor Seidman?

Our Founding Fathers knew one thing when they penned the Constitution, and that is human nature does not change.  It hasn’t changed since the days of Jefferson and Adams or Adam and Eve.  Human nature is constant, and that is why the Founding Fathers put “Freedom of Speech” and “The Right to Bear Arms” number one and two in the U.S. Constitution.  Lastly, if CBS and professor Seidman had their way, a new document for governing the nation would probably start with the words “The government says” instead of “We the People.”