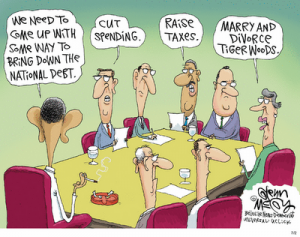 I was sitting here trying to find a way to wrap up the week and then, like a bolt of lightning, an idea hit me.  Gold expert Jim Sinclair sent me this story: “Federal Budget Deficit Hits $1 Trillion For 1st 9 Months Of FY’10.”  The story said, “The shortfall, reflecting $2.6 trillion in outlays for the first three quarters and $1.6 trillion in receipts, narrowed slightly compared with the same point in fiscal 2009.”  So where did the “shortfall” come from?  Try the more that 8 million who lost their jobs.  The story went on to say, “. . . individual income and payroll tax receipts were down 4% over the nine-month period, suggesting that wages and salaries have not improved to the extent that corporate profits have.” Corporate profits have “improved” because they laid-off all those workers!!  (Click here for the entire Dow Jones Newswires story)

Sinclair says, “Nothing has changed. Nothing has been rescued. The can that is being kicked daily down the path is going to turn around and bite the kickers.
Gold is the only insurance.”  When things get bad enough, there will be more stimulus cash put into the economy and more bank bailouts.  Sinclair is like legendary football quarterback Joe Montana–never bet against either of them.

The second story that should scare the heck out of you is one where the headline reads, “IMF presses US to cut debt.”  The story goes on to say, “The International Monetary Fund on Thursday urged the United States to rein in its ballooning budget deficit without putting the “modest” economic recovery at risk.  Amid jitters that high levels of unemployment may force a double dip recession, the IMF warned the slow U.S. recovery would continue and that debt problems loomed.”  (Click here for the complete story from Yahoo News.)

Talk about a squeeze.  The U.S. has lost millions of jobs; it has falling tax revenues and a ballooning deficit.  Now is the time the International Monetary Fund picks to tell the U.S. to cut its debt?  Not a chance going into the 2010 mid-term elections!  People like Paul Krugman and Nancy Pelosi are pushing for more spending (money printing).  I am betting they will get their wishes granted.

These two stories do not bode well for the so-called “recovery,” the value of the U.S. dollar and  keeping interest rates held down to ridiculously low levels.  These two stories scare the heck out of me.  Not just because of what they say, but also because they’re making their way into the mainstream media.  That means, before long, everybody will catch on America is in deep financial trouble.  We do not have a “dip” coming our way but a swan dive off of Niagara Falls into a dry river bed.