Home
»
Political Analysis
»
Violence Will Get Even Worse – Kevin Shipp 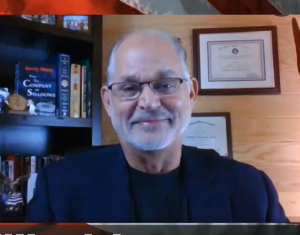 Former CIA Officer and counter-terrorism expert Kevin Shipp says the violence you are seeing in American cities is not going to stop anytime soon.  Is the violence going to get worse?  Shipp contends, “It will get worse.  We are going to see it amplified leading up to the election, and it’s going to get even worse after the election.  These people see this as their moment to act.  It’s a moment that they have been building for a couple of decades.  We are going to see the attacks increase, especially by Black Lives Matter (BLM).  People need to understand and be prepared for what is coming. . . . They are desperate.  They know the Democrat Party does not have a real candidate to offer.  Donald Trump is extremely strong, and they also know that Trump has a support base that is larger than it was during the last election. . . . They see this as their time.  They are not going to give up, and they are not going to stop.  They have been encouraged by Nancy Pelosi, Kamala Harris and others, such as Maxine Waters, to increase the violence.  So, they are being encouraged by top Democrats, and they are not going to stop.  This will escalate.”

Shipp says, “BLM and Antifa want a civil war.”  Shipp explains, “That’s exactly what they want, a civil war, and they want to split America.  They understand that the conservative people and the patriots out there have gained a lot of ground.  They are intentionally starting a civil war to overturn our Constitutional system and our fundamental belief system. . . .They are starting a civil war, and they are starting serious attacks.  It’s not just Trump supporters, but Black Lives Matter has had attack after attack on white Americans simply because of their race. . . . Anyone who resists this movement, they label them as a white supremacist with no facts and no evidence.  They know exactly what they are doing.  When they do this, and I am talking about the Democrat Party, it is a propaganda technique because it shuts down any discussion and any examination of the facts. . . . People who are representing Trump at these ‘protests’ need to understand they are in danger.  It’s clear they have an organized effort to attack Trump supporters and conservatives with violence.  So, people need to be prepared and situationally aware of their surroundings.  Look for somebody following them.  Look for a brewing protest on the street and things like that. ”

After the election, Shipp predicts, “Trump is going to win, but when Trump wins . . . these people are just going to go crazy and escalate the violence.”

As far as the cheat-by-mail campaign the Democrats have been pushing, Shipp thinks, “They are a little late in the game.  So, I don’t think that’s going to work.  What they may do if the ballots don’t come in until after the election . . . they will say we’ve got all these votes, and we want to count them.  They will contest the election, and that’s already part of their plan.  They know these mail-in votes are not going to work this late in the game.  After the election, they are going to claim that this is reason to contest the election and not concede.  Just watch it happen.”

Shipp also predicts, “I think Trump is going to have a wider margin of victory than he did in 2016.  The Democrat Party has shot themselves in the foot . . . encouraging this violence, thinking it was going to make Trump look bad and make things look unstable.  It has backfired on them. . . . The Democrats already know they have lost, and Joe Biden sadly gets worse by the week in terms of his mental acuity, and they know it.  It’s embarrassing and cruel for the Democrat Party to keep putting him in that position. . . . The Democrats are terrified, and Donald Trump is going to decimate Joe Biden in the debates.  Democrats are going to do everything they can to keep these debates from happening.”