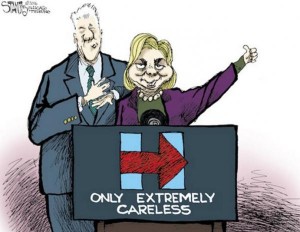 You’ve heard by now, Democratic presumptive nominee Hillary Clinton will not be charged over her unprotected email servers she used while at the State Department. Even though FBI Director James Comey pointed out multiple lies Ms. Clinton told, he decided not to recommend charges and said he “could not prove intent.”   He also explained his decision to Congress this week but would not comment when asked about other investigations into the Clinton Foundation.  Comey revealed that he did not personally interview Ms. Clinton last Saturday or even attend the deposition.  He also revealed that Clinton did not testify under oath.  Democrats in the hearing said Republicans were grilling Comey just to score points against their presidential candidate.  Now, leaders in the House of Representatives are preparing a recommendation to the FBI to look into allegations Clinton lied to Congress in the Benghazi hearings.

The big question is will no charges help or hurt Clinton’s presidential run? Back when President Bill Clinton was impeached over the Monica Lewinsky case, his popularity actually rose in the polls.  Some people thought he was unfairly punished.  Will the opposite happen with Ms. Clinton NOT being charged?  Will people perceive there is a two-tier justice system?  Meaning, there is one system for the powerful and connected and one for the little people.  Clinton supporters want to put this behind them, but political experts say this issue will continue to get attention until the November presidential election is over.

If you wanted to look at just one stock to gauge the health of the global economy, you would probably be watching what the Federal Reserve says is “the most systemically dangerous bank” in the world, Deutsche Bank (DB).  Week after week, DB stock keeps hitting one fresh low after another.  On Thursday, it fell again 37 cents a share to hit $12.60.  Less than 10 years ago, the stock fetched around $140 per share.  This week, $100 billion money manager Jeff Gundlach said, “When Deutsche Bank goes to single digits, people will start to panic.”  We are just a few dollars away from a global panic, according to Mr. Gundlach.  By the way, the Bank of International Settlements (BIS) says it will be defenseless in the coming crash because it has “no bullets.”