Home
»
Political Analysis
»
What the Big Headline Should be Today 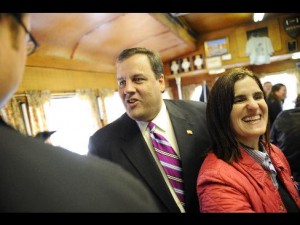 The headline today will probably be something like “Big Republican Wins on Election Day!”   Bob McDonnell won the Virginia Governor’s job and Chris Christie (left) unseated Democrat Jon Corzine for Governor in New Jersey.   I am sure there are going to be many stories about the revived party of Lincoln.  Some will proclaim the health care plan is dead or the Democrats will lose control of at least the House or the Senate in 2010.  Fact of the matter is, it’s not going to make much difference whether Democrats or Republicans are in power. The economy is in deep trouble because America is drowning in debt.  Many experts say the economy and the dollar are doomed to fall further in the future.

Today the Price of gold hit a new all time high!  It closed at $1,084.90!  What the headline should be is “Gold Flashing Warning Signal At New All-Time High.”  What caused the $30 run up in a single day?  India bought 200 metric tons of the yellow metal from the International Monetary Fund.   India buying gold is dollar negative and is just a small part of a world in the process of moving away from the U.S. Dollar.

According to Bloomberg…“This will encourage other countries and other investors, especially Indians, who are big buyers anyway, to jump into the market,” said Leonard Kaplan, the president of Prospector Asset Management in Evanston, Illinois.

The Reserve Bank of India paid $6.7 billion for the bullion, which it bought from Oct. 19 to Oct. 30. It was “the biggest single central-bank purchase that we know about for at least 30 years in such a short period,” said Timothy Green, the author of “The Ages of Gold.” “The only comparable event was the U.S.’s steady purchases in the 1930s and 1940s.” (The complete Bloomberg story)

The “other countries and other investors” include China and Russia.  China has already been a big buyer in the gold market.  Earlier this year, it disclosed it secretly increased the country’s gold holdings by 75%.  China is also the world’s biggest producer of gold and is keeping every ounce it produces.  Russia backs a partial return to the gold standard to help resolve the financial crisis that started in 2007.

The entire world sees a weaker dollar in the future.  The big question is how much weaker?  The feeble dollar will spell inflation and some say hyper-inflation is a real possibility.  Talk about the depreciating dollar seems to be everywhere.  Here is an excerpt from a Forbes article that came out yesterday: “…Make no mistake about it: Central banks have not been liquidating their gold. This sale by the IMF (to India) is therefore an extraordinary event at a time when there is little gold supply to meet the burgeoning demand by investors wary of paper currency. Trillions of dollars have been injected into the financial system to save it from Armageddon; they must find a home somewhere.

Just listen to Buffett. Back in May, he warned, “No one can know the precise level of net debt to GDP at which the United States will lose its reputation for financial integrity.” In other words, printing money can degrade the integrity of the dollar, making gold look like an attractive alternative to Treasuries that yield 3.5%….” (click her for the complete Forbes article)

I made the case for a much weaker dollar or even a dollar collapse in my early September post, “Something Wicked This Way Comes.”  As the dollar goes down in value, gold will go up in price.  Gold expert Jim Sinclair (jsmineset.com) has been predicting gold at $1,650 on or before January 2011 for at least 3 years.  He has said many times that his original prediction will be on the low side and that gold will go much higher in price.  The lower dollar will have a devastating effect on America’s standard of living.  The Republicans had a big day yesterday, but big inflation is on the way no matter who is in control.