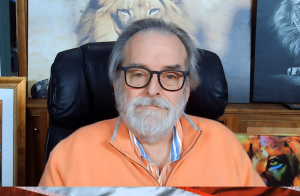 Renowned radio host, filmmaker and book author Steve Quayle says evil satanic globalists want you to believe there is no God the Father and no Jesus the Son.  Instead, they want you to believe that aliens made humankind.  Quayle, who is privately funding expeditions to dig up artifacts thousands of years old, says the narrative that aliens created humans is a huge lie.  Quayle and his team have recently dug up ancient Egyptian artifacts from Mexico and Central America to prove his point.  Quayle says, “I want to share this.  There are 27 forms of incredibly ugly creatures.  We have panels and photographs that others have excavated in the late 1950’s that show the aliens sexually encountering human females and giving birth to some ‘its.’  In no place is there any indication that the aliens created humans, but there is every indication they messed with the DNA. . . . We have found in the language that they have translated (from the ancient artifacts the Quayle team has found) . . . and the overwhelming concern the amount of genetic tampering from creatures we found polluting the human genome.  This is interesting because if   you flash forward to where we are at now with the Messenger RNA vaccines and the transformation of the human genome, when do you have so much tampering that you are no longer human? . . . The Biblical Luciferian takeover of the Earth translates into the Tribulation period, and during that Tribulation period, the number one goal of the fallen angels and their controller, which would be Lucifer, is to basically destroy all humanity.  That’s why Jesus said if God did not shorten the days for the elect sake, the righteous, those who believe in Jesus, there would be no flesh left alive.  That’s where the whole transhumanism argument comes in.”

Quayle also says, “When you look at the artifacts that are coming out of Mexico and Central America, we can look at the absolute evidence of the genetic tampering by aliens. . . . It is my contention that the fallen angels are the ones that tried to generate species apart from God that we see in the myths and legends of the world. . . . Jesus said the gates of hell are going to open. . . . When God created us, he created us with his miraculous genius, and the devil hates the image of man more than anything.  I’ll tell you why, human beings can be redeemed.”

In closing, Quayle says, “We are at this point in history where the cover up and cover over people are keeping the ‘aliens made us narrative’ under wraps until the day comes where they hoist this on the world and say forget this Christian and God stuff.  This is who created us . . .and that’s a lie.”

There is much more in the 55-minute interview.

Join Greg Hunter as he talks to radio host, filmmaker and top selling author Steve Quayle as he talks about his upcoming conference “The Egyptian & Alien Connections in the Americas” for 10/22/22. 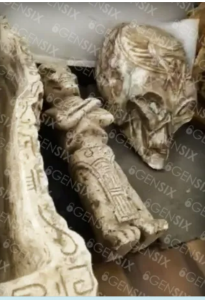 To see the free “The Egyptian & Alien Connections in the Americas” trailer, click here.

To sign up for the late November conference called “The Egyptian & Alien Connections in the Americas,” click here.  It will include a 4-hour documentary on the artifact digs in Mexico and Central America.

To find out more about the “ISatPhone2” satellite phone or the Bivy Stick from Satellite Phone Store, click here.