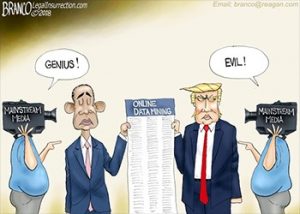 Facebook was gamed for 50 million user profiles by the GOP, and the liberal mainstream media and Democrats alike are all bent out of shape about this privacy breach. Of course, when Facebook was gamed for personal information by the Obama Campaign, it was not a problem.   Recently, it was revealed by a former Obama campaign official that Facebook was “on our side” in the 2012 election.

Dr. Dave Janda from “Operation Freedom” will be the guest for the “Early Sunday Release.” Janda uses his deep Washington D.C. sources to update us about what is going on behind the scenes in the D.C. swamp.