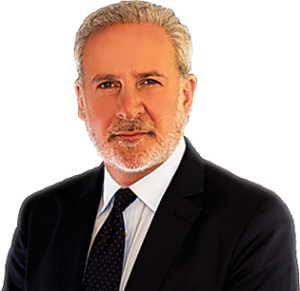 Money manager Peter Schiff is not surprised the stock market is way off its highs for the year. Schiff explains, “The crazy part was the markets going up. What makes sense is it coming back down. The Fed was really playing a game of how many straws it could put on the camel’s back before it breaks it. Each time they raised interest rates, it was another straw. I postulated on one of my podcasts that the last rate hike that the Fed put through was the rate hike that would break the camel’s back. The camel being the markets and the economy, and I think that’s exactly what happened.”

Schiff says the Fed is very weak and is going to have a hard time fighting inflation when it hits. Schiff contends, “In fact, right now, the Fed’s liabilities exceed its assets because, on paper, the assets have gone down. So, the Fed, right now, is already insolvent, and the degree of insolvency is only going to increase as inflation and interest rates rise higher.”

Schiff warns, “The next crisis is not just going to be financial crisis. It is going to be a currency crisis, a U.S. dollar crisis, which is going to be a lot worse. Unfortunately, from that crisis, there are no bailouts. In the financial crisis, they sacrificed the dollar. They printed a bunch of money (in order to bail us out). If you have a dollar crisis, you can’t do that. If you have a dollar crisis, you have to shrink money supply. You have to defend your currency by raising interest rates. That means the stock market crashes. That means the bond market crashes. That means the real estate market crashes. That means a lot of people lose a lot of money. There’s a lot of bankruptcies and a lot of defaults. Then, the government has to come clean and tell people on Social Security we can’t pay you. It has to tell people on Medicare we can’t pay. They have to tell government retirees we can’t pay these pensions. In fact, they have to tell holders of U.S. Treasuries we can’t repay. . . . That’s what’s going to have to happen in a dollar crisis. . . . Look, we’re broke. We have over-promised on every level. . . . No politician wanted to raise taxes to fund their obligations, but they still wanted to make promises to get reelected. The benefits are not going to get paid. The only question is how will the default occur? Will it be honestly, where the government says we are not going to pay? Or will it be dishonestly, where you get paid your money and your money doesn’t buy you anything? Either way, the pensions are no good.”

Schiff predicts, “Americans are going to be impoverished on a national scale.”

So, what is Schiff telling his clients to protect their wealth? Schiff says, “You’ve got to get money out of the U.S. dollar, out of U.S. bonds, out of U.S. stocks . . . which is what I am doing for my clients. I am creating portfolios of dividend paying stocks in countries that have much sounder economies where there are much sounder currencies, where the people are saving and they have balanced budgets. . . . I am telling people to take advantage of how inexpensive gold and silver are and some of the mining stocks. . . .I not only think I am going to help people preserve their wealth, I think I am going to help people enhance their wealth. . . . I think gold and silver are incredibly mispriced because it really reflects the excess confidence that people have in central banks and fiat currency. They should have no confidence, but they do. . . . I don’t tell people to put their entire net worth into gold, I tell them 5% to 10%. Most people have no money in gold. Those people are going to be very unfortunate. . . . Just like a family cannot live on debt forever, and you just can’t keep on borrowing money indefinitely, you are going to have a day of reckoning. The same thing applies to a nation. We cannot do collectively what we each can’t do individually. Our day of reckoning is coming, and it’s coming soon. It’s a done deal, it’s going to happen. All you can do is save yourself and family.”

There is free information, analysis and podcasts on Europac.com and SchiffGold.com.