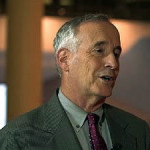 In January, Economist Dr. Laurence Kotlikoff said he was “worried” that the economy was reaching “a real threatening point.”  The Cyprus banking crisis hit the Globe last week.  Now, when asked if he was still “worried,” he replied, “This morning, I moved my money out of the stock market  . . . because I’m worried about Cyprus.”  Dr. Kotlikoff explained his dire concern by saying, “The rich people are already running on these banks.  That’s been going on for a year. . . . The everyday working people could start visibly running on these banks, and that could spread like wildfire throughout Southern Europe and Northern Europe and into the U.S. because we have a banking system that’s built to fail.”   Dr. Kotlikoff also says, “It’s going to happen in the form of a crash in the bond market.  Interest rates are going to skyrocket, and we’re probably going to have high inflation because the government is printing money out the wazoo.”  Join Greg Hunter as he goes One-on-One with Economics Professor Laurence Kotlikoff of Boston University.