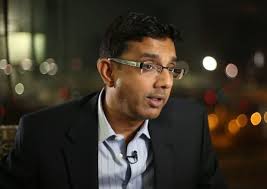 Filmmaker and best-selling author Dinesh D’Souza imagines a world without America.  In his new book and movie titled “America,” D’Souza says, “There are a lot of people who don’t like the America today, who don’t like what we know now.  They don’t like what I call the ‘spirit of 1776.’  They see themselves as progressive.  They want to get beyond all that, and they have a powerful critique of America.  So, what I do in the film is I lay out their critique.  I let them rail and rant against America.  This is everybody from Obama to Hillary, Senator Elizabeth Warren, Michael Moore, the radical and former domestic terrorist Bill Ayers, and the whole menagerie.  They make the case against America, and then we take it on one by one.”

In the movie “America,” D’Souza explores President Obama and his connection to Saul Alinsky.  Alinsky is best known for his book “Rules for Radicals” published in the early 1970’s.  D’Souza says, “We were able to get rare footage of Alinsky that had never been seen before in the United States.  We heard about Alinsky, this community organizer, who was in Chicago.  He’s somebody Obama heard about, and that’s why Obama kept going back to Chicago.  Think about it, Obama has no roots in Chicago.  He comes from Hawaii.  He lived part of his life in Indonesia, but he kept going to Chicago because he heard about this guy, Alinsky.  Who was Alinsky?  He was basically a shakedown artist.  He used to hang out with the mafia, and he realized what the mafia does–they shake people down for money.  Alinsky said, how do I do that politically?  He mastered a technique for shaming people and then getting them to depart with cash.  Obama thought, wow, I’m a young shakedown artist, and I want to learn how Alinsky got away with it.”  Hillary Clinton is another with a connection to Alinsky.  D’Souza says, “Hillary has even closer connections with Alinsky.  She met Alinsky in high school, continued a relationship in college, and wrote her senior thesis at Wellesley College on Alinsky.”

On the ongoing crisis concerning the southern U.S. border, D’Souza says, “I think the border crisis is a pure Alinsky type of move.  Here’s what I mean by that.  Alinsky’s strategy was always to take people of good will and put them into an impossible situation.  At one point in his book, he talks about exploiting the innocence and decency of the American middle class.  We don’t like to say no to people who show up with outstretched arms.  They’re hungry, they’re sick, they need inoculations.  So, Obama’s point is how do I manipulate the goodness of the American people to put them in an impossible position?  Well, simply put out the word on the other side of the border that we are not that serious about enforcing the immigration laws.  Moreover, we are trying to get amnesty for lawbreakers already in this country.  Pretty soon, half the world shows up, and Obama throws up his hands and pretends, oh gee, how did they all come here?  I don’t blame them.  I blame the cynicism and manipulation of the Obama Administration which has manufactured, to a large degree, this crisis.”

D’Souza landed on the radar of President Obama after his previous movie titled “2016: Obama’s America.”  D’Souza says, “Sometimes people say, gee, Obama doesn’t have time to worry about what you think.  Actually, he does.  He’s the kind of guy that hates criticism.  He’s been coddled and pampered all his life.  He has a press that genuflects before him, and that’s why he feels he can get away with anything because, so far, he has.”

With all the wars going on, what roll will America play?  D’Souza thinks, “In the book and the movie called “America,” the subtitle is ‘Imagine a world without her.’  When I came up with the subtitle, I thought of this as a thought experiment.  Hey, let’s imagine what the world would look like if you didn’t have America.  Well, when I look around the world now, I see that this is becoming a little more than a hypothetical.  We are beginning to see what does happen around the world when American influence is diminished or subtracted.  What happens?  Number one, we see Putin increasing his aggression in the Ukraine.  We see China modernizing its nuclear arsenal and building its weaponry.  We see Iraq in flames.  We see Iran consolidating its power and making a bid for domination for the Middle East. . . . It’s not as if Obama is fiddling while Rome burns.  This is what Obama wants.  He wants to reduce America’s influence in the world, and we are beginning to see what this world actually looks like.” 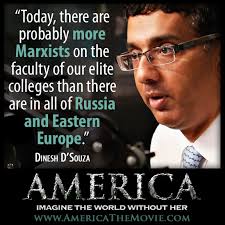 For more information about Dinesh D’Souza and his books and movies, go to DineshDsouza.com.