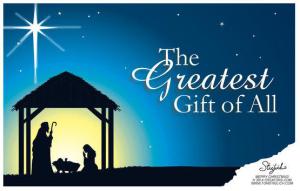 I am taking some time off for the Christmas weekend; so, there is not going to be a Weekly News Wrap-Up this week.  Thank you all for participating in this site.  It is you who make it a success.  By the way . . .  Gerald Celente is coming on next week with his forecast for 2015.  It will be an “Early Sunday Release” (ESR).  It’s probably the best interview I have done with him, and he has had many good ones here.  Merry Christmas!!