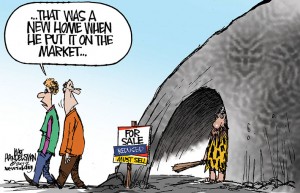 The big news, this week, was the $25 billion mortgage settlement with the five biggest banks in the country over allegations of mortgage and foreclosure fraud.  It has been reported that $13.5 trillion of potential fraud is going uninvestigated and unprosecuted.  This settlement is a travesty of justice and a total rip-off of America.  This deal is being spun that delinquent homeowners are getting a bailout, refinancing and debt forgiveness and that it was the government’s fault because it forced the banks to loan money to people who couldn’t pay it back.  I don’t think the government forced the banks to sell liar loans and package those loans into mortgage-backed securities, selling the toxic junk to unsuspecting investors.

Then, when it all blew up, I don’t think the government forced the banks to commit foreclosure fraud and forgery to take back the houses.  The government did turn a blind eye to all the fraud and is still doing so today.  Not a single financial elite has been prosecuted for these alleged crimes, and I don’t think they ever will.  There will still be lawsuits, but the Federal government looks like it will turn a blind eye to criminal charges now that this deal is done.  Don’t look for the housing market to get better.  This deal shows prices have a lot further to fall as more homes are taken by the banks.

Let the foreclosure flood gates open again so the banks can make some more money to stay afloat.  There was also a $170 billion Greek debt deal this week.  More cuts are coming to wages, pensions and public services.  You wonder why there are more strikes and demonstrations going on in one of the world’s oldest democracies.  Is this a glimpse of what’s in store for America?  Things in Syria are heating up, and it is looking more and more like a full blown revolution that the west is covertly supporting.  It was reported, this week, the U.S. military is looking at its options in the region, as if possible war between Israel and Iran is not enough to consider.  See all these stories and more from Greg Hunter and USAWatchdog.com in the Weekly News Wrap-Up.