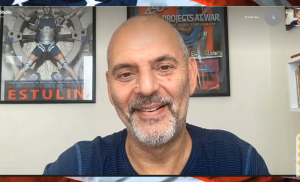 International best-selling author, journalist and counter-intelligence expert Daniel Estulin says the problems in the world revolve around the rapidly dying financial system and a “coming global bankruptcy.”  Estulin contends, “We are looking at $3 quadrillion or $4 quadrillion of global debt, and you are looking at the end of the Bretton Woods economic model.  We are at a critical stage for humanity that will determine the direction of the world.  There is much at stake for us but especially for the liberals because their model, which is based on infinite growth, is coming to an end.”

According to Estulin, the United States is in for hardship and poverty never seen before.  Estulin says, “This is the year for the United States.  A lot of things are going to be decided financially, economically, socially and with a president that should not be there.  The Democrats understand this, and that is why they are leaving in droves. . . . We are coming into some serious pain moments for the global economy.  The Russians are used to suffering and having to live on nothing.  You (USA) are not.”

How bad will this get?  Estulin, who is former Russian intelligence, says just look at what happened to the Soviet Union when it broke up in 1991.  Estulin points out, “Between 1991 and 1998, 26 million Soviet citizens died.  It was caused by starvation, depression, drugs, alcohol and all kinds of things.  Most importantly, it was because 40% of our countrymen lost everything that they saved over the history of their country. . . . In 1989, in the entire Soviet satellite space, there were around 500 million people in the Soviet Union.  There were only 14 million people living under the poverty line.  That’s 14 million out of 500 million people.  In 1996, just seven years later, these 14 million with the destruction of the Soviet Union, became 168 million.  So, from 14 million, it went up to 168 million people living under the poverty line.  The same thing is going to happen to the West and the United States. . . . This will be at least two times worse than what happened in the 1929 to 1933 period.  That means future generations are going to be infinitely worse off than my generation. . . . It means the standard of living in the West is going to be something they have never in their lives imagined.  The kinds of things coming to America and to the west is what you see on television.  You are talking about World War III zombies or some kind of other horrible things.  It is coming home because the United States is in the same position as the Soviet Union in 1991.  You have a President named Joe Biden who has dementia for goodness’ sake. . . this is a carbon copy of Brezhnev in the Soviet Union in 1981.”

Estulin also contends to deal with the so called “reset” and their dying financial system, the desperate globalists have no problem doing away with large chunks of the population or dramatically changing their DNA.  Estulin says, “The final stage for the liberals is the evolution of humanity. . . . In other words, the politics of post humanism. . . . The liberals (such as Klaus Schwab of the World Economic Forum) are praising the new possibilities of post humanism.  We need to understand what these people are going to do with us, and it’s in black and white.  It’s the fusion with a machine that will greatly enhance body strength, memory and genetic engineering . . . what these people want is immortality. . . . Any one that does not agree with this agenda, they are declared enemies of open society, and you get cancelled.”

Join Greg Hunter as he goes One-on-One with best-selling author Daniel Estulin to talk about what is going on now with the “global bankruptcy” and “reset.”  These are just a few of the topics Estulin analyzes in great detail in his latest book “2045 Global Projects at War.”  (There is much more in the 54 min. interview.)

If you want to get a copy of Estulin’s latest book “2045 Global Projects at War,” click here.