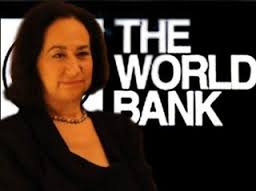 (You Tube has restored the video.  Apparently it was some sort of glitch on their end.  I am happy it is back up.)

World Bank attorney Karen Hudes says she is one of a group of global whistleblowers.  Hudes contends, “We’re running out of time. It’s time to tell these thugs and crooks that they’re fired.”  Hudes goes on to say, “We don’t have to wait for anybody to fire the Fed or Bank for International Settlements . . . some states have already started to recognize silver and gold, the precious metals, as currency . . . there are other alternatives like Bitcoin . . . We, the consumer, can choose which currency to use, and that’s what we’re going to do in very short order.”  What’s really going on in Syria?  Hudes, who was Senior Counsel and worked at the World Bank for 20 years, charges, “Qatar, who has all this natural gas, wanted to run a natural gas pipeline through Syria to reach the European market.  Who’s supplying the European market with gas?  Russia. . . . All this business about dead babies and sarin gas is just all to keep us confused.”  Hudes says this is not a fight about money but survival of the planet.  “We’re dealing with whether we can continue as humanity and have an earth or whether we blow ourselves up. . . . whether we love each other enough to save the world, or we all go to hell in a hand basket,” says Hudes.  Join Greg Hunter as he goes One-on-One with World Bank whistleblower Karen Hudes.