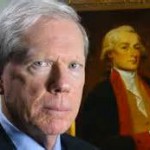 Former Assistant Treasury Secretary Paul Craig Roberts says, “The country is not being run by the President.  It is being run by spy agencies and private interest groups, Wall Street and military security complex . . . They run the country.  The President is a puppet, a figurehead.”  Dr. Roberts contends, “If you are a lawless state, which the United States is, it obeys no international law.  It does not obey the Geneva Convention . . . It tortures people.  It doesn’t obey the Constitution.  It doesn’t obey anything.  It does what it wants. . . . If you are a lawless state, you disguise yourself as a democracy.”  Former President Jimmy Carter agrees.  Just last week, Carter said, “The U.S. has no functioning democracy at this moment.”  Why hasn’t the mainstream media picked up this astounding comment from a former Democratic President?  Dr. Roberts says, “Five firms now own what used to be a large dispersed independent media.  Nobody can open their mouth, they’d get fired.  They have become a propaganda ministry for government and corporations.”  Dr. Roberts goes on to say, “My prediction or expectation is by winter, the second downturn of the Great Recession will be in place.  Unemployment will explode, more foreclosures are coming.  It’s going to be worse than the Great Depression.”  Join Greg Hunter as he goes One-on-One with economist Dr. Paul Craig Roberts.