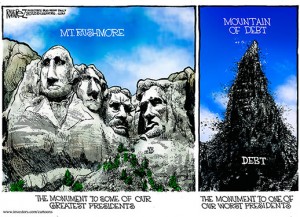 Monday’s post closed with, “. . . The nonpartisan agency projected the government will run a deficit of $229 billion in February, the highest monthly figure ever.”  (Click here for the complete report from the Washington Times.)    That means the government spent nearly $8 billion more than it took in each and every day of last month (29 days).  This is not a sign of economic “strength” but of tremendous weakness.  You cannot print your way to prosperity, but it can pave the way to an economic collapse.”  (Click here for Monday’s complete post.) The $229 billion (February) deficit was reportedly revised upward, making the situation worse than I reported.  Tax receipts are, also, not keeping up with the monthly deficits.  You cannot grow the deficit to infinity.  This is totally unsustainable, and the only question is when will the game be over?  Please keepin mind, the real annual U.S. budget deficit is really near $5 trillion (using GAAP) not the $1.3 trillion reported by the MSM.  This according to a recent Shadowstats.com report.  Zerohedge.com had a good piece yesterday to explain the terrible news.  It said, “A few days ago we noted that based on preliminary data, the February budget deficit would hit $229 billion (yes, nearly one quarter of a trillion in one month, about where real Greek GDP is these days) – the largest single monthly deficit in history. Unfortunately, this number was low: the final February deficit was just released and the actual print is $231.7 billion. It also means that in the first 5 months of the fiscal year, the US has raked up $580 billion in deficits, oddly matched by $727 billion in new debt issuance, 25% more new debt issued than needed to fund deficits… And that in itself would not be horrible – February is traditionally the worst month for deficits as the Treasury sees a surge in tax refund issuance – if it wasn’t for something even more troubling. As the second chart below shows, through last Friday, and net of tax refunds, total US tax revenues were actually lower in the fiscal 2012 year to date period than compared to 2011, by just under $2 billion, at $625.5 billion. Which is the weakest link for any argument that the US is actually growing:” (Click here to read the complete Zerohedge.com post and see the charts that give an ugly picture of the rising U.S. deficit.) –Greg Hunter–