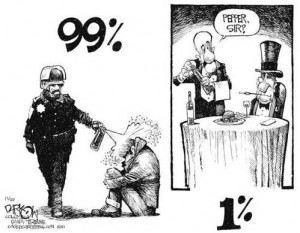 It looks like the EU is getting a bailout from the IMF that could be nearly $800 billion.  Gold is going straight up, and I am sure global stock markets will also surge on the bailout news.  This will not really fix what is wrong.  It will also not put an end to the chronic crisis mode Europe and the U.S. have been in for the past 3 years.  I mean, if all the global bailouts didn’t fix the problem, including $16 trillion pumped out by the Fed after the 2008 meltdown, what’s another $800 billion going to do?  The reason why things are not going to get better is that corruption is rampant and the financial system is totally broken.  Bailouts are treating the symptom, but the disease is unbridled fraud.  Many people don’t realize this because the corporate controlled mainstream media will not report on crimes of the financial elite.

Last week, I wrote a piece called “False Narrative.”  I was stunned by a comment from a guy named Jim that said, “It amazes me that you maintain the narrative of the “guilt” of private business that asked for consideration from Congress and the president and it was granted. Nobody has gone to jail because no laws were broken.”  This is the most false of the false narratives.  The 2008 meltdown is 70 times bigger than the S&L crisis of the 1980’s and early 1990’s.  Back then, more than 1,000 financial elites were convicted of felonies.  According to Professor William Black, the reason why we have “recurrent intensifying crises . . . is these epidemics of fraud from the C-Street—from the CEOs and CFOs.”  Professor Black holds duel PhD’s in economics and law, but he is not just some run-of-the-mill academic.  Professor Black is also a former bank regulator who spearheaded the cleanup of the S&L crisis.  In a speech Black gave last week, he said, “In the Savings and Loans crisis, the inevitable National Commission said that fraud was invariably present at the typical large failure. In the Enron era, always frauds from the very top of the organization, and in this crisis the frauds came from the very top of the organization again. But what’s different in this crisis? In this crisis, the same agency that I worked with that made over 10,000 criminal referrals in a tinier crisis made zero criminal referrals. They got rid of the entire function. And so there are zero convictions of anybody in the elite ranks of Wall Street. And if they can defraud us with impunity they will cause crisis after crisis and they will produce maximum inequality. . . . And that’s why we have a crisis and it came from the very top of these organizations, and it went through—as the FHFA said in its complaint—the largest banks in the world were endemically fraudulent. It is not a few rotten apples. It is an orchard of one percenters who are rotten to the core.” (Click here to read his complete speech.)

Don’t believe the professor, then how about the “maestro” Alan Greenspan.  The former Fed Chief admitted the system was fraudulent and needed to be cleaned up last November.  He said, “If you cannot trust your counter-parties it won’t work and . . . it didn’t.”  He was sitting on set with Ben Bernanke when he said it.  Look at the video below, and watch Mr. Bernanke’s face when Greenspan dishes the dirt.

Look at the latest blowup with MF Global.  There is more than $1 billion of segregated customer funds missing and not a single criminal charge.  Does anyone think Jon Corzine is going to get prosecuted?  I’ll be shocked if he is because he has friends in high places including the White House.

Just because nobody has gone to jail doesn’t mean everything is going to be ok and we all get a free pass.  According to Karl Denninger at Market-ticker.org, the markets will be the ultimate regulator.  Denninger wrote last week, “Without enforcement of the law — swift and certain — there is no deterrent against this behavior.  There has been no enforcement and there is no indication that this will change.  It will take just one — or maybe two — more events like MF Global and Greek CDS “determinations” before the entire market — all of it — goes “no bid” as participants simply stuff their hands in their pockets and say “screw this.”  It’s coming folks, and I guarantee you this: Whatever your “nightmare” scenario is for such an event, it’s not bearish enough.”  (Click here for the complete Denninger post.  It’s really good!)

You cannot have a thriving economy that is shrouded in fraud and mistrust.  Crimes continue to go unpunished, and mistrust is growing.  No bailout, no matter how big, will ever fix that.