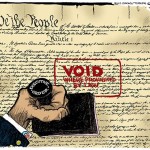 It’s all guns all the time as President Obama makes a big push for gun control.  Part of the plan includes “Executive Orders.”  The other part of the President’s plan includes new legislation that bans assault weapons.  This coming at a time when the nation’s top bankers fraud and crime is enormous and going criminally unpunished.  More deals are being cut to eliminate any criminal prosecutions of top bank officials for committing fraud and crime on a scale never seen before in America.  From LIBOR rate rigging fraud to mortgage security fraud to foreclosure fraud to money laundering for drug cartels and terrorists—all have gone without a single criminal prosecution.  All the bankers get are fines, and in most cases, they don’t even have to admit they’ve done anything wrong.  All the fraud and the bailouts that go with it have made the financial system weaker than ever.

There is no mention of his license to kill without charge or trial.  No mention about the gutting of the due process clause of the 4th Amendment.  Now, the Obama Administration wants to crack down on guns for honest people while his banker buddies set us all up for another market meltdown because of rampant fraud.

The President surrounds himself with children to push gun control while his banker buddies illegally kick millions out of their homes and commit major financial crime.  What happened to the debt negotiations?  This is a national security issue, and the President is starting another fight when the last big fight over budget cuts and debt ceiling is far from over?

Is there any wonder why Germany wants to start bringing its gold home?  Could this start a run by other central banks to get their gold returned back home as well?  The Fed holds more than 6,000 tons of gold that belongs to other countries.  Are world central banks losing trust in the Fed?  Who knows, but this is a serious widely reported story, and it carries big implications as to the stability and trustworthiness of the U.S.

On top of that, yesterday, the U.S. mint has suspended sales of Silver Eagle coins because they have run out of product.  This is another warning sign that folks are not comfortable with the dollar or how the finances are going here in the U.S.

Hostages were taken and some have been and killed in Algeria in fierce fighting to free them.  Al-Qaeda is to blame.  The situation is far from over.  In Syria, the civil war rages on.   The death toll in the nearly 2 year war is approaching 50,000.  Meanwhile, outgoing Defense Secretary Leon Panetta is refuting charges the Syrians have used chemical weapons on their people.

Finally, the drought in the West and parts of the Midwest are severe.  The winter wheat crop will definitely be reduced, and beef prices are going to be going up this year because of the drought.   No rain will mean higher prices for food globally.