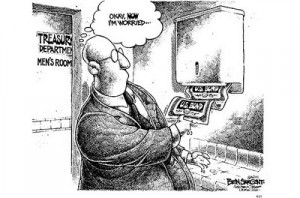 Occupy Wall Street is 2 months old and is gaining speed.  Thousands protested in dozens of cities yesterday, and hundreds were arrested.  It’s all about the Wall Street bankers who cheated and rigged the game, not against the wealthy.  Democrats love this issue because they have a bad economy.  The OWS movement directs the argument to how do you want this fixed– the Democrat way or Republican way?  Is Syria headed for civil war?  It sure looks that way.  The Arab League has rebuked the leadership of Syria because of the violent reaction to protests over the past few months.  Will Syria be another Libya for NATO?  The EU debt crisis is getting worse, not better.  It is reported the wealthy are moving their money out of Italian banks.

The MSM is oblivious to this.  Meanwhile, the fallout from MF Global’s bankruptcy is ballooning.  Traders fear the commodities futures market is not safe and the system may lock up.  Jim Willie predicts before it’s over, COMEX will be cash and carry only.  MF Global bankruptcy is an unfolding disaster.  A new report by Shadowstats.com says the annual deficit is not $1.3 trillion.  If GAAP accounting was used, the U.S. annual deficit would be north of $5 trillion.  Williams says the government deficit is out of control and not sustainable.  Finally, the U.S. announced this week it is putting troops in Australia.  2,500 will be stationed there in the next few years.  That means more military might with access to the South China Sea.  There are important shipping lanes and natural resources there.  China is not happy, and tensions between the U.S. and this communist country are increasing.  These stories and more from Greg hunter’s USAWatchdog.com in the Weekly News Wrap-Up.