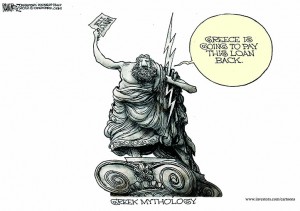 Israel and Iran are, once again, the big stories this week.  The Prime Minister of Israel, Benjamin Netanyahu, basically said he doesn’t need the blessing of the U.S. to attack Iran’s nuclear sites.  Meanwhile, the U.S. has given Iran a “last chance” ultimatum to work out a peace deal with its nuclear program or be attacked by the end of the year.  Can war be far away?  Fuel prices are heading higher according to Edmunds.com and many other oil market analysts.  The national average is approaching $4 a gallon, but it’s already $5 a gallon in certain areas on the East and West coasts.  Experts expect to see a $5 per gallon national average this year, but if there is war in the Middle East, all bets are off.  The sky is the limit.  There is still no clear winner in the GOP for the presidential nomination, but Santorum and Romney appear to be fighting it out at the top.  Some Republicans want Newt Gingrich to step aside, and the MSM is now nearly ignoring Ron Paul.  The Greek debt deal was hammered out last week, but is it really over?  The CME is signaling there is trouble brewing with the credit default swaps that insure the toxic bonds.  This week, the Chicago Mercantile Exchange voluntarily asked that it be removed as a derivatives clearing organization in Europe.  The bondholders took a nearly 75% loss to get the new Greek debt deal done and are likely going to be looking for the CDS “insurance” to pay the difference.  Could it all blow up soon?  I don’t think the CME stopped doing business in Europe because it was going to be making too much money in commissions.