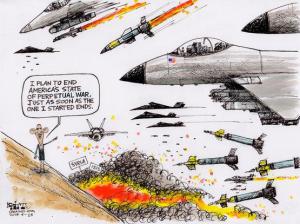 The top story is the bombing campaign on ISIS in Syria and Iraq, but at this stage, it is mostly Syria.  The U.S. promises a “Long Campaign,” with the bombing of the Islamic State in Syria and Iraq.  The Obama Administration has the support of other Arab nations, but the most important support comes from Saudi Arabia.  Remember last year when the Obama Administration backed out of bombing Syria.  Top Saudi officials were quoted as saying that they were “stabbed in the back” by President Obama.  Fast forward to today and rumors of Saudi Arabia to stop using the petro dollar when selling oil.  No doubt the Saudis threatened to pull the plug on the dollar.  Now, it looks like this bombing deal in Syria will prolong the use of the dollar when buying and selling oil, at least for a while.   One other thing, President Obama talked at the UN and asked for help with the Islamic State that he called a “network of death.”  The liberal press can’t bring itself to call this what it really is–Islamic extremists.  This story calls them Middle East militants.

Eric Holder announced he is quitting his job as Attorney General.  My question is why now?  I guess it could be any number of things such as the “Contempt of Congress” case that is proceeding.  It could also be the “Fast and Furious” case that a federal judge just ruled that there can be no more delays with providing records.  It may also be the IRS targeting that, in reality, is felony First Amendment criminal activity to suppress political opponents.  In this case, Tea Party Republicans were targeted by IRS criminals.  There is “not a smidgeon of evidence” in wrongdoing according to the President, but then again, all those hard drives crashed and were destroyed with no backup.   I think Holder is going to be a political hot potato, and he’s leaving office well ahead of the 2016 election so to do as little damage as possible to the Democrats.  Holder’s problems are far from over.

The top commander of NATO says there is cease-fire in Ukraine in “name only.”   You have not heard much on this subject, but it too, is far from over.  Russia is now drafting some new laws in response to the sanctions from the West over Ukraine.  Russian lawmakers want to seize property of foreign companies inside Russia.   Let’s just name a few things that can be seized if this law passes, and I think it will.  McDonald’s has hundreds of stores in Russia.  BP and Shell oil have major projects there.  Think they will be able to remove equipment such as refineries and drilling rigs?  France has a very big dairy operation in Russia.  French businesses can lose everything from cows to pasture land and barns.  Germany has 6,000 companies doing business in Russia.  I am sure there are lots to seize there too.  Let’s not forget winter is around the corner, and you can expect Russia to cut natural gas supply and raise prices.  My only question is will they stop the sanctions before or after Europe’s economy goes into a full blown depression.

Finally, I have the crop report.  Bumper crops here in the Midwest back to the East, but the West is a far different story.  Most of California is at the worst level of drought, and many other places from Texas to Oregon are very dry.  This spring will be mud slides, and food prices will be going much higher.  Pray for rain.

(Much more in the video Wrap-Up.)