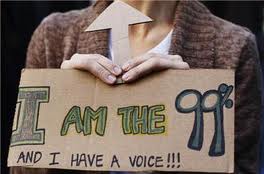 I have to applaud the “Occupy Wall Street” movement even if their message is a little disjointed.  I think the message will sharpen in time.  I hope the main focus continues to be the ongoing market manipulation and crime that has gone unpunished.  I know folks on both sides of the spectrum are criticizing these folks.    I am not surprised because, after all, both parties have been bought off by the Wall Street bankers.  (I am behind anyone who is exercising their First Amendment rights.)  James Howard Kunstler (Kunstler.com) has written a very clever and thoughtful post on the New York protesters.  He gives us his vision of where this movement is heading, and I could not have done anything better.  Please enjoy!  –Greg Hunter–

“Recession Officially Over,” The New York Times’ lead headline declared around 7 o’clock this morning. (Watch: they’ll change it.) That was Part A. Part B said, “US Incomes Kept Falling.” Welcome to What-The-Fuck Nation. I suppose if you include the cost of things like the number of auto accident victims transported by EMT squads as part of your Gross Domestic Product such contradictions to reality are possible. Elizabeth Kübler-Ross, where are you when we really need you?

I dropped in on the Occupy Wall Street crowd down in Zuccotti Park last Thursday. It was like 1968 all over again, except there was no weed wafting on the breeze (another WTF?). The Boomer-owned-and-operated media was complaining about them all week. They were “coddled trust-funders” (an odd accusation made by people whose college enrollment status got them a draft deferment, back when college cost $500 a year). Then there was the persistent nagging over the “lack of an agenda,” as if the US Department of Energy, or the Senate Committee on Banking, Housing, and Urban Affairs was doing a whole lot better.

This is the funniest part to me: that leaders of a nation incapable of  constructing a coherent consensus about reality can accuse its youth of not having a clear program. If the OWS movement stands for anything, it’s a dire protest against the country’s leaders’ lack of a clear program.

For instance, what is Attorney General Eric Holder’s program for prosecuting CDO swindles, the MERS racket, the bonus creamings of TBTF bank executives, the siphoning of money from the Federal Reserve to foreign banks, the misconduct at Fannie Mae and Freddie Mac, the willful negligence of the SEC, and countless other villainies? What is Barack Obama’s program for restoring the rule of law in American financial affairs? (Generally, the rule of law requires the enforcement of laws, no?)

Language is failing us, of course. When speaking of “recession,” one is forced into using the twisted, tweaked, gamed categories of economists whose mission is to make their elected bosses look good in spite of anything reality says. I prefer the term contraction, because a.) that is what is really going on, and b.) the economists haven’t got their mendacious mitts around it yet. Contraction means there is not going to be more, only less, and it implies that a reality-based society would make some attempt to acknowledge and manage having less – possibly by doing more.

Instead, our leaders only propose accounting tricks to pretend there is more when really there is less. The banking frauds of the past twenty years were a conspiracy between government and banks to provide the illusion that an economy based on happy motoring, suburban land development, continual war, and entertainment-on-demand could go on indefinitely. The public went along with it following the path of least resistance, allowing themselves to be called “consumers.” They also went along with the nonsense out of the Supreme Court that declared corporations to be “persons” with “a right to free speech” where political campaign contributions were concerned – thereby assuring the wholesale purchase of the US government by Wall Street banks.

Praise has been coming in from all quarters for the peacefulness of the OWSers. Don’t expect that to last. In the natural course of things, revolutionary actions meet resistance, generate friction, and then heat. Anyway, history is playing one of its little tricks by simultaneously ramping up the OWS movement in the same moment that the banking system is actually imploding, with the fabric showing the most stress right now in Europe. I shudder to imagine what happens when OWS moves into the streets of France, Germany, Holland, Italy, and Spain.

All of the action right now has the weird aura of being an overture to the year 2012, fast approaching as we slouch into the potentially demoralizing holidays of the current year. I don’t subscribe to Mayan apocalypse notions, but there’s something creepy about the wendings and tendings of our affairs these days. OWS is nature’s way of telling us to get our shit together, or else. This means a whole lot more than bogus “jobs” bills and Federal Reserve interest rate legerdemain. It means coming to grips with the limits of complexity and purging the system of the idea that anything is too big to fail. What happens when Occupy Wall Street becomes Occupy Everything, Everywhere?