Home
»
Political Analysis
»
America Will Not Be Destroyed – Bo Polny 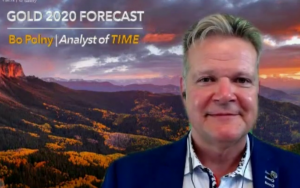 Cycle expert and financial analyst Bo Polny predicted near the first of the year there was a “new era of time” starting on the 21st of April 2020.  Polny explains, “Things take time to happen.  Life is not a switch in God’s world.  So, if it’s the 21st of April, life doesn’t change on the 22nd.  There’s a transition period.  Noah was on the Ark for an entire year, actually a little more than a year, before he actually stepped off the Ark with all the animals and his family.  That would equate to April 26th of 2021.  So, when he stepped off the Ark is when he stepped into a new world or a new era.  If that was not a delineation point for a new era, exactly what is?  Even though the old world we knew is finished and over, we are in a transition point.  We really have not seen the new world yet because we are in the transition point.  In a transition point, we still have these people trying to run the world still in power. . . . Do expect immense changes, and I do feel September 18th of this year is going to be pretty epic.  Everything changes after April of next year.”

President Trump gave a speech last week and said he has “a lot of very, very rich enemies, but they are not happy with what I’m doing.”  What does Polny think Trump meant?  Polny says, “Please think about the moment that Christ walked into the temple and started flipping all the money tables.  Do you think all those people were happy?  Or, were they freaking out? . . . Trump, like Christ, is overturning the money tables.  The present day money tables are big pharma, the Federal Reserve, government agencies, politicians, fake news, China, including the trade deal and intellectual property, the pedophiles, drug cartels and the like who have all been working together quietly for generations, and now they are losing money.  It’s all about the money, and Trump is turning the tables on them.  They hate him.”

Polny has long said Trump will be re-elected in November and also says, “We’ve all seen the Trump hat that says ‘Make America Great Again.’  That cycle is over.  The next Trump Cycle began on April 21st 2020 and ends on December 17th of 2023.   Trump Cycle number two is called ‘Make America Blessed Again.’  Blessing is coming.”

But that doesn’t mean there is not going to be monetary pain.  Polny says, “The time of prosperity is for those who have listened and prepared with gold and silver, and at the same time, it will be a time of scarcity for those unprepared with hyperinflation beginning in quarter three and four of 2021 and sooner for those unprepared.  But it’s going to go into full effect in the latter part of 2021. . . . 2021 will be epic because we will officially be in a new era by the end of April of next year.”

Polny says, “Silver is still a steal.  I think silver could go to $65 per ounce, and we could see that as early as September, but surely before the end of the year. . . .  It might go to three digits by the end of the year.  It’s going to be really fun to watch.  Silver turns into rocket fuel in 2021 in the real bull market that we are waiting for.  So, we ain’t seen nothing yet.”

Gold is also heading much higher, according to Polny’s cycles, and “$2,500 per ounce in September is very possible and could be much higher.”  Bottom line, Polny says, “Gold and silver will continue to get more expensive, and prices will continue to explode higher.”

In the stock and bond market, Polny says, “We have not seen the real crash yet.  What we saw in March was a prelude to the crash.”

Polny says the two things you should do now is “keep praying and vote this November to make the second Trump cycle become a reality.”

In closing, Polny says your faith in Christ is the most important thing to have.

Join Greg Hunter of USAWatchdog.com as he goes One-on-One with cycle analyst Bo Polny of Gold2020Forecast.com. 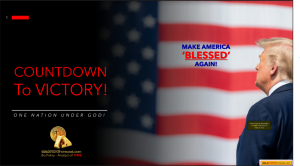 If you would like a reduced rate on a 2 week trial on the price moves of “Gold Turn Dates” click here. (Use discount code USA49)

If you would like a reduced rate on a 2 week trial on the price moves of “Bitcoin Index” click here. (Again, use discount code USA49)