Home
»
Market Analysis
»
Everything Will Come Tumbling Down – Rick Ackerman 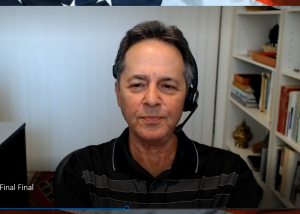 Analyst, professional trader and financial writer Rick Ackerman says don’t expect the trillions of dollars of borrowed money given away in government stimulus to save the economy. It will not. Ackerman explains, “For every dollar of debt we create, we only get 33 cents of growth. . . . The stimulus is having less and less of an effect, and because it has less of an effect, it stimulates the stimulators to do even more stimulating, which essentially means more borrowing. So, that’s what’s called a debt trap, and we are very much in it. . . . There is no question you get a shot in the arm on the consumer spending side and also with asset inflation with the real estate market and stock market. Don’t kid yourself, you are not creating sustainable growth to pay off that borrowing. We are not going to grow our way out of this.”

Ackerman says the write downs starting in 2021 in “commercial real estate, energy, municipal transit systems and insolvent pension finds” (just to name a few) are going to be enormous. Ackerman says, “The illusion can’t really be sustained if we have a recession, and we are going to have one. . . .I think the election could be the start of a bear market. . . . No matter if Trump wins or Biden does, I think you better sell the news. . . .I have real trouble believing that we are going to be able to sustain the illusion for another whole year. I think 2021 is going to do it. The stock market is the underpinning for all the craziness and extreme folly. Everything is going to come tumbling down if a bear market happens.”

Ackerman likes gold and silver too, but not because he sees explosive price rises. He likes precious metals because they are solid core investments. They work well in inflation or deflation. They are rugged and will work no matter what comes. Ackerman thinks what is coming will be far worse than the Great Depression, “I call it the ‘Second Great Depression.’ . . . What are we going to have? A zombie apocalypse? . . . . I use the example of somebody riding to the soup kitchen on an $8,000 graphite trail bike. . . . We are going to find out how many of the jobs are completely unnecessary, like 95% of people who work for government. That’s coming. . . . It’s coming sooner or later, and we are going to have a time or day of reckoning . . . . How long can this con go on? . . . . We are in a very unstable position and, financially speaking, we have stimulus not stimulating anymore in a meaningful way.”

Join Greg Hunter of USAWatchdog.com as he goes One-on-One with analyst and financial writer Rick Ackerman.

There is free information and original analysis on RickAckerman.com.

To get much more, you can become a subscriber. There is a two-week trial on the front page of RickAckerman.com that will cost you $1.