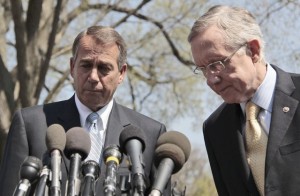 It is looking more and more like the budget showdown between the Democrats and Republicans will turn into a government shutdown 2011 by this weekend. The Obama administration has already started to inform federal workers who will be required to still come to work and those who will be told to stay home.

The Washington Post reported yesterday, “About 800,000 of the 2.1 million federal workers nationwide were expected to be furloughed, with exceptions for national security and other essential employees . . . . “If there is a shutdown, it would have very real effects on the services the American people rely on, as well as on the economy as a whole,” Jeffrey Zients, deputy director for management at the Office of Management and Budget, told reporters at the White House.”  (Click here to read the complete Washington Post story.)

During the last several , there have been a series of short-term spending bills to keep the government running.  The latest includes $12 billion in cuts offered up by the Republican controlled Congress that will buy another week to negotiate.  This time, the President is digging in his heels according to a Washington Times story yesterday, “Without a short-term extension, lawmakers face two options: either reach a deal on a broad bill to fund the government for the rest of this year, or else have the government shut down as of midnight Friday.  “If presented with this bill, the president will veto it,” the White House said in an official statement of policy objecting to the House’s offer. The White House said it was “a distraction from the real work” on reaching a broader agreement.” (Click here to read the complete Washington Times story.)

If the government does shut down, it will not be the first time. There have been several government shutdowns since the early 1980’s.  The last one happened in the mid 1990’s.  Back then, the deficit was just under $36 billion.  By late 1997, the deficit shrank to just $17.3 billion.  In the mid 90’s, unemployment was low, the stock market was on fire without any help from Fed money printing, and the U.S was pretty much at peace.  The government shutdown was a political blunder for the Republicans, but the over-all economy didn’t miss a beat.

Fast forward to today, and you see a totally different U.S. economy with a government shutdown looming.  The deficit is $1.6 trillion, unemployment in real terms is high (22% according to Shadowstats.com), the stock market is being propped up by $75 billion a month in money printed out of the thin air by the Fed, and the U.S is bogged down in 3 separate wars in North Africa and the Middle East.   The stakes could not be higher, and the damage caused by a shutdown could not be more troubling.

Hundreds of thousands of federal workers and military personnel will not be paid.  Government loans by the FHA, Fannie and Freddie will probably grind to a halt, further depressing the real estate market.  Plenty of other non-essential government entities such as parks and museums would close.  The size of the problem to the economy would depend on how long the government is shutdown.  Yesterday, The Baltimore Sun reported, “Officials and analysts said a shutdown that lasts only a few days would be unlikely to have a significant impact on state government operations, largely because federal funding is often distributed to local jurisdictions in advance. But if the closure dragged on for more than a week, they said, the situation would become far more challenging.  Among the top concerns for local officials are the tens of thousands of federal employees in Maryland who would be furloughed. If those workers are not paid, a two-week shutdown could reduce the state’s income tax revenue by as much as $40 million, according to a state estimate.” (Click here for the complete Baltimore Sun Story.)

Multiply the Maryland projections by all 50 states (by a more or less in lost state income tax) and the budget picture is not pretty.  Keep in mind, most states are struggling with big shortfalls.  In places like Illinois, California, New Jersey and Texas, the budget problems are extreme.  One thing is for sure, a government shutdown will be a drag on an already struggling economy.  We just don’t know how big or how long the drag will be.