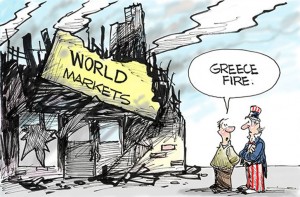 I keep asking myself, when is a deal not a deal?  Every time I hear the words “Greek debt deal” or “Greek bailout” in the same sentence, I wonder if, this time, they really have a deal.  Yesterday, I was thinking that again when it was announced there was a new Greek debt deal.  The headline from Reuters read, “Europe seals new Greek bailout but doubts remain.”  My favorite paragraph in the story said, “An opinion poll taken just before the Brussels deal showed that support for the two mainstream parties backing the rescue had fallen to an all-time low while leftist, anti-bailout parties showed gains.  Anastasis Chrisopoulos, a 31-year-old Athens taxi driver, saw no reason to cheer the deal.  “So what?” he asked. “Things will only get worse. We have reached a point where we’re trying to figure out how to survive just the next day, let alone the next 10 days, the next month, the next year.”  (Click here for the complete Reuters story.)  There are elections in Greece in April.  What do you bet one of the “anti-bailout parties” wins?  There may be a deal today, but not in the not-so-distant future.

Another headline read, “Greece secures bailout to avoid debt default.”   Why should headlines be so misleading and give false hope?  Buried in the story was this nugget, “But despite those unprecedented efforts, it was clear that Greece, which kicked off Europe’s debt crisis two years ago, was at the very best starting on a long and painful road to recovery. At the worst, the new program would push the country even deeper into recession and see it default on its debts further down the line.”  (Click here for the complete story from MyWay.com.)   The headline should have read, “Greece secures bailout to avoid debt default for now.”

Let’s be frank here, Greece is going to default.  In the end, it will be the best choice–not for the bankers but for the people.  The bailout is really more debt put on the backs of the Greeks to help the bankers who made very bad loans.  You want to see what I call a true headline that tells the real story?  It comes from Graham Summers of Phoenix Capital.  It says, “Greece Is Not Lehman 2.0 as I’ll Show You, Its Far Far Worse.”   Now, that’s a headline you will not see on the mainstream media, but in this case, it’s probably a much better analysis of what is really going on.  Summers says, “In plain terms, Greece racked up too big of a tab and simply doesn’t have the means of paying it. End of story. The world needs to realize this. Because Greece will default and it will default in a big way.”  (Click here to read the complete post from Mr. Summers.  It’s sort of a sales pitch, too, but the report is valid.)

I also think Greece will default.  When that happens, it will not be pretty for European or American banks.  You see, European banks hold a lot of these sovereign bonds, and American banks sold insurance in the tens of trillions of dollars thinking no sovereign country would ever default.  They would just raise taxes and pay the bondholders.  This gives new meaning to the phrase “you can’t get blood out of a stone,” which basically means you cannot extract what isn’t there to begin with.

Big American banks may be too big to fail no matter how badly they behave, but Ellen Brown from Webofdebt.com thinks some U.S. banks may, also, have too much exposure to save.  In her latest post, Brown lays out the case that a Greek default could take down Wall Street.  Brown said, “. . .there is one bit of bad behavior that Uncle Sam himself does not have the funds to underwrite: the $32 trillion market in credit default swaps (CDS).  Thirty-two trillion dollars is more than twice the U.S. GDP and more than twice the national debt.”  (Click here for the complete post from Webofdebt.com.)

It amazes me how a country the size of Greece (with less than .5% of the global GDP) can be so frightful to the global economy.  What would a sovereign debt default in Italy (8th biggest economy on the planet) do to the world economy?  That’s probably coming, too, but not until the game is over in Greece.