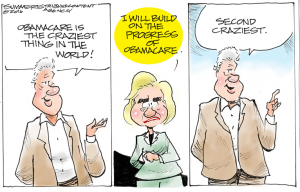 The U.S. and Russia are a lot closer to war in Syria than the mainstream media (MSM) would like you to think. One top U.S general said that war would be “extremely lethal and fast” and he said it was “almost guaranteed.”  Russia threatened to “shoot down U.S. aircraft over Syria.  Meanwhile, Secretary of State John Kerry has broken off all diplomatic relations with Russia in Syria.

The International Monetary fund (IMF) is warning of much slower global growth. That means there is an even better chance that the ocean of debt accumulated around the world will not be repaid.  Puerto Rico just defaulted on its $70 in debt, and that is just the tip of a much deeper debt iceberg.  The IMF also warns that debt to GDP globally is an astounding $225%, and it says there is $152 trillion in debt around the planet.

The MSM continues to reveal themselves for the biased political hacks they are. They have told you that it is the MSM’s “duty” to “Stop Trump.”  Anybody with half of a brain knows that journalism has ceased long ago, and the MSM are just political shills who do not care if they destroy their own business model.  To be a journalist, you must be a fair arbiter of the truth.  The only thing the MSM is doing is cutting their own journalistic throats by their political hack job against Trump.  Look for big layoffs in the MSM when Trump wins.