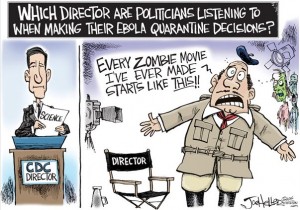 The Ebola circus continues, and the Obama Administration officials look like clowns.  Let’s just take a look at a few of the headlines.  “Health System Not Prepared for Ebola” is a headline from the AP, and that is in stark contrast to what we have been told.  “Small clusters could overwhelm the system” is what the article says.  So, this begs the question of why no quarantine?  Some governors in places like New Jersey, New York and Illinois think quarantine is the way to go.  It is scientific technique on how to contain infectious disease, but that is not what the Obama Administration thinks.  Some in the MSM think the same thing.  This opinion piece says the decision by these governors is “hasty” and “adds to the Ebola problem.”  Really?  Well, that is not what the Pentagon thinks because it is “isolating troops back from Africa for 21 days.”  Some of the talking points are downright bogus.   They say things like we should treat these returning health care workers like “conquering heroes.”  Who is going to think these folks are “heroes” if they come back and infect people?  Africa’s best chance of beating this is if America stays strong and uninfected.  If America is consumed by Ebola, or even the fear of Ebola, West Africa hasn’t got a chance.

The Federal Reserve supposedly ended its QE program this week.  That is where they printed money to buy bonds to hold interest rates down.  So, what’s going to hold interest rates down now?  Are they just going to put all this Federal debt out for bids and let the market set the interest rates?  Can the Federal government, home buyers, car buyers, credit card holders and the overall economy afford higher rates?  You’ve got to be kidding.  Gregory Mannarino of TradersChoice.net says the Fed can’t just say it wants low interest rates.  It has to do something to keep them low.  Mannarino thinks the Fed is now going to force the big banks that got all this QE to buy Treasury and other government debt.  Mannarino told me that he thinks the Fed is going to continue to print money to finance another form of QE.  He says the money printing has not ended and will never end.  The Fed is just going to call it something else.  The Fed also says the economy and employment have improved, and the third quarter had a 3.5% growth rate.  John Williams of ShadowStats.com says the 3.5% growth rate is “Happy election eve numbers” and says it was boosted by “guessed at trade numbers and defense spending.”  Williams says look for a downside revision.  If the economy was really that good, would we have nearly 93 million people not in the workforce?  There are 46 million people on food stamps, and half of Americans make less than $28,000 a year.  Would mortgage applications be hitting 19 year lows?  Would former Fed Head Alan Greenspan be warning about “turmoil” in the economy because of ending QE?  Oh, and “Maestro” Greenspan is also telling people to buy gold?  Let that sink in, Greenspan is telling people to buy gold!!

Violence appears to be flaring up in Israel again.  An Israeli was shot at the famous Temple Mount religious site, also known as the al-Aqsa Mosque.  The site was closed down after the shooting of an Israeli right-wing activist.   Now, Palestinian Authority President Mahmoud Abbas is calling for a “day of rage.”  Violence is expected.

Finally, I just received notification that my health care provider is going to raise my premium again for next year by about a $100 bucks a month.  My health care has gone up by about 60% since Obama Care was signed into law.  Blue Cross and Blue Shield of North Carolina says that it’s going up because not enough young people have signed up.  I have no problem with Blue Cross and Blue Shield.  Health care costs money, especially with a bad law.  Health care was supposed to be cheaper because of Obama Care, but for most people—it’s not.  Multiply those increases by millions of policyholders and you can imagine what is going to happen to the economy.  What really gripes me is the Democrats lied as a party to get this economy killing plan passed.