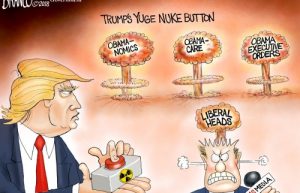 China threatened to stop buying U.S. Treasury debt. The main stream media is ignoring this story, but former Assistant Treasury Secretary Dr. Paul Craig Roberts once said, “If China started to sell U.S. debt, it would be the end of America.”  It’s a very big deal, and China is sending a very big message to the Trump Administration.

Treasury Secretary Steve Mnuchin said more sanctions are coming for Iran. It looks like the so-called nuclear deal (which was never signed by Iran) is not going to continue under the Trump Administration.  Iran is warning of trouble if Trump walks away from the nuclear agreement that was negotiated by the Obama Administration.

Walmart is raising its minimum wage to $11 an hour from $9 an hour. The company is also giving out bonuses up to $1,000 for employees.  The company says it’s doing this because of the recently passed Trump tax plan.  On the other side of the economic coin, Walmart has abruptly closed 63 Sam’s Club stores, laying off thousands of workers.  Meanwhile, Sears and other stores are closing locations.  Many on Wall Street are saying there is a correction coming for the stock market, even though America has seen improvements to the overall economy.

Former CIA agent Kevin Shipp author of the popular book “From the Company of Shadows,” will be the guest on the “Early Sunday Release.”