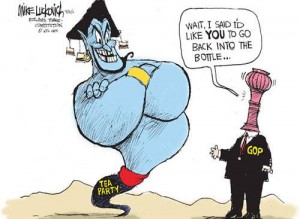 I appreciate what the Tea Party and folks like Congressman Paul Ryan are trying to do.  Mr. Ryan, who is the House Budget Committee Chairman, said when the debt deal passed, “This is a down payment on the problem and it’s a good step in the right direction.”  Ryan went on to make what is probably the most important point, “And it is a huge cultural change to this institution.”  Amen to that Mr. Congressman, but this debt reduction bill is like trying to bail water out of a battleship with a thimble.

This “step” should have been taken a long time ago.  The new legislation will add $2.4 trillion to the $14.3 trillion national debt in a little over a year.  And we don’t even start saving money until after the debt reaches $16.7 trillion!  This bill doesn’t even cut the deficit.  It just slows the growth of government spending to around 8% a year!  So, even if Congress cuts $2.1 trillion out of the budget over the next 10 years, we will still be running annual deficits of more than $1 trillion.  That rosy scenario is only possible if the economy does not get any worse.  Recent economic data is signaling American business activity is about to take another cliff dive.  Housing is bottom bouncing with a shadow inventory that is now 3.35 million homes and growing.  The true unemployment rate is now 22.7% (if computed the way BLS did it in 1994).   The recent year over year 1.6% growth reported by the Bureau of Labor Statistics in the Gross Domestic Product (GDP) is a statistical crock, according to economist John Williams of Shadowstats.com.  In his most recent report, Williams said, “The SGS Alternate-GDP estimate for second-quarter 2011 is an approximate annual contraction of 2.8% versus the official estimate of a 1.6% gain.  Such is more negative than the alternate 2.6% annual contraction (2.2% official gain) in the first-quarter.”  Double-dip here we come.

So, in reality, the economy is contracting at an increasing rate compared to last year–not expanding.  Things have turned so negative recently; there is increasing chatter on mainstream media about a third round of quantitative easing, or money printing (QE3.)  You might remember a post I wrote this past January where I said, “In summary, all the experts I polled think QE Will Not End.  That will surely mean an imploding U.S. dollar and exploding inflation.  This is scheduled to happen by the end of June, making this the most predictable financial calamity in history.”  (Click here for the complete post from January 2011.)  What is happening today?  The dollar is tanking, gold is on a tear, and the economy is headed for another fall.

Bill Gross, head of the world’s biggest bond fund (PIMCO), thinks QE3 is probably on its way too from the Fed, but in a different form than QE2.  Gross said yesterday he was not impressed with the recent deficit reduction deal.  Gross called it a “sound and fury significantly nothing type of event,” or, in other words, just a lot of noise.  On CNBC, he went on to say, “I mean there’s been $1 trillion of cuts, but they’re basically back loaded.  Nothing takes place in 2012.  It all begins in 2013.  And actually, it’s slower economic growth if it comes as we suggest.  It probably will increase the deficit more than these packages will decrease it.”

What do you think will happen to tax receipts coming into the federal government if the economy tanks?  If you guessed the government will collect less money in taxes, you are correct.   Not only will the deficit grow, but the $2.4 trillion that is supposed to last through the 2012 election is going to be used up at a much faster pace.  Peter Schiff, President of Euro Pacific Capital, said this week on FOX, “The one bit of irony here is the President thinks they’ve raised the debt ceiling enough to get through the next election.  I think he’s probably wrong.  I think the economy is going to be so weak between now and then that the deficit is going to be so much worse than they think, it’s going to be that we might run into the debt ceiling long before the November election.”

I hate to break this to Congress, but America does not have 10 years to get its house in order.  There have been recent predictions by financial experts of another economic meltdown by the end of 2012 or beginning of 2013. (Click here for more on the coming economic collapse prediction.)  Something has to be done now, and we just lost an opportunity to truly turn the ship of state around.  Like her or not, that is exactly the same point Congresswoman Michele Bachmann made this week in a FOX News interview when she talked about thousands of recently announced layoffs.  She said, “. . . Cisco is laying off 6,500 employees. Boeing who would love to add thousands of jobs in South Carolina and now it’s that they’re laying off 1,100 jobs in California. . . . these companies . . . can’t make cuts over 10 years. They have to make them immediately. Government doesn’t act like that.”  (Click here for the complete Bachmann interview.)

I don’t know if I would vote for Ms. Bachmann for President, but I find it difficult to disagree with her logic on this subject.  By the end of next year, America will be in debt to the tune of $16.7 trillion. That staggering amount is way more than all the goods and services the country produces in a year.