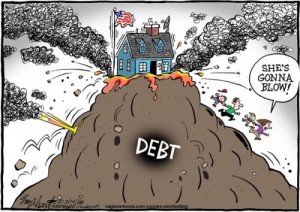 The most pressing problem on the planet right now is the European sovereign debt crisis.  It is a gigantic highly leveraged mess caused by greedy reckless bankers.  It was nurtured with the help of regulators who turned a blind eye and allowed the problem to mushroom into an uncontrollable financial cancer.  The European Union is struggling to come up with a plan or bailout fund big enough to truly end the crisis, but there is none in sight.  Every time there is a plan, it is shot down or falls apart.  There was talk of Germany backing the EU bailout fund with its gold reserves, but that was rejected by the Germans.  (Germany is the world’s number two holder of gold with 3,412 tonnes.)  Can you blame them?  It is ironic this so-called bailout fund is looking for tangible backing and that world leaders would turn to the yellow metal.  Didn’t they all have a pact to sell gold not so many years back?  This tells me any country with toxic sovereign debt that wants a bailout better be considering putting up its gold reserves.

The first troubled country that comes to mind is Italy.  It has the fourth largest gold reserve in the world with 2,451 tonnes.  Spain is in just as much debt and trouble as Italy, but only has 281 tonnes of gold.  It ranks around 17th on the list.  These two countries have ten times the sour debt of Greece.  I predict Germany will not be the last country to be asked to put up its gold.  I suspect there is not a country on earth that will elect to give up control of its yellow reserves.  What else is there?  I don’t think Italy would put up the island of Sicily for collateral, no more than the U.S. would post the Hawaiian Islands as security for a loan.

They call this a sovereign debt crisis, but it is the banks that are really at the heart of the problem.  This leaves the EU with very limited options.  They can allow the banks holding this sovereign debt to default, or print money to bail them out.  Laws have been passed in Europe that allow the banks to count toxic sovereign debt as an asset.  It is a novel idea–overwhelming debt that doesn’t have a prayer of being fully repaid counted as a store of value.  (Oh wait, what was I thinking, this is the same thing the American government allows U.S. banks to do!)  That means you can also say the sovereign debt crisis is bank solvency crisis.  If you mark all sour debt for what banks can get for it today, many European financial institutions would be insolvent.  End of story.

Harvard Professor Niall Ferguson, an expert on the history of money, thinks the EU will be forced to turn on the printing press.  He recently said, “The ECB will have to continue buying bonds. They will have to print more aggressively than they have. . . . In the end, it’s going to be the ECB that prints its way out of the crisis…. It’s the only credible end game.”  Ferguson’s complete Bloomberg interview from late October is below and is worth watching from top to bottom.

Turning the printing presses on full blast will devalue the currency and cause inflation.  I think the ECB will do a combination of bank failures and printing trillions of euros to pick the banks they want to survive.  This is a dicey situation because if the power brokers choose wrong, there could be a daisy chain of default.  Not just in Europe but in the U.S too.    Either way, there is going to be pain for the masses.

Renowned economist Martin Armstrong thinks the situation with sovereign debt is dire for all of Western civilization and time to act is running out.  In an article last week, Armstrong said, “We are in the final throws of a Sovereign Debt Crisis upon which the entire future hinges. Pension funds depend upon government bonds. Once one sovereign nation defaults, capital will respond as it historically has – it will look at the financial landscape and ask the only question worth asking – Who is next? We are cascading toward a choice of MONETIZATION or DEFAULT.”  (Click here to read the complete Martin Armstrong article.)  Don’t kid yourself, it wouldn’t take long for the U.S. to move to the top of the list.  Liquid dollar assets could be sold off and interest rates could spike.  ($12 trillion in liquid dollar assets are held outside the U.S. according to Shadowstats.com.)

Armstrong thinks that if nothing is done soon, the world could be headed for “Financial Armageddon.”  He goes on to warn, “We are on the edge of complete collapse of the Western Financial System that threatens to destabilize everything and obliterate our future. Pension funds depend upon SOVEREIGN DEBT. We are in a position where there MUST be a complete structural reform, or everything goes bust and civil unrest will destroy what is left.”

Armstrong is a consultant to very large hedge funds and governments.  He says he just returned from Washington D.C. where he was invited to meet with what he calls “the good guys who know we have a serious problem.”  I hope enough legislators on both sides of the aisle listen to him while there is still time to make a difference.