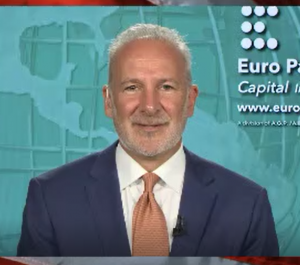 The stock market sold off nearly 800 points (Tuesday) on a day when the Federal Reserve gave the biggest interest rate cut since the 2008 financial crisis. It was a surprise .5% cut to a key rate that should have boosted stocks. Instead, the market tanked–hard. Economist and money manager Peter Schiff says, like in the movie “Jaws,” when they see the monster Great White shark they have been hunting, a freaked out crew member says, “We need a bigger boat.” Schiff says, like in Jaws, “The Fed needs a bigger rate cut,” to fight a monster economic problem.

Schiff predicts, “I think we are at the beginning of the end of this fiat based monetary system that the world has been on since 1971. . . . I think what’s going to happen in this crisis is the dollar is going to lose its special privilege. I think gold is going to be remonetized, and I think central banks are going to start backing their paper with real money, and that is gold, again. America is going to have to do the same thing.”

So, how high could the price of gold be per ounce–thousands of dollars? Schiff says, “Well, no question. The only question is how many thousands of dollars per ounce? It’s a moving target because all gold is doing is measuring the purchasing power of fiat currency, and we are talking about dollars. There is no floor for how much purchasing power the dollar could lose. So, there is no ceiling on how high the price of gold can get. . . . If the dollar loses 90% of its purchasing power, then gold price has to increase 10 fold to reflect that.”

On the stock market, Schiff says, “Everybody is a long term investor until they need the money. This is a giant Ponzi or pyramid scheme. . . . The only way people can retire from their stock portfolio is to sell shares. . . . Or if everybody is stuck in the same emergency . . . who are you going to sell your shares to? . . . I think this is the most overvalued stock market in history. It’s not the coronavirus. The market was going to go down anyway. . . . It’s not the size of the pin, but the size of the bubble. This is a massive bubble. It finally found a pin.”

Join Greg Hunter of USAWatchdog.com as he goes One-on-One with economist and money manager Peter Schiff of Euro Pacific Capital and Schiff Gold.