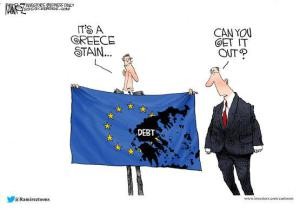 Whether it is Greece or Puerto Rico, the story is the same—the debt is unpayable.  Greece is going through a referendum and they are taking a que from the Clash song “Should I Stay or Should I Go.”  Meaning, should Greece stay or leave the European Union?  I say it is not going to make much difference.  The Greeks, as everybody else in the world, have been living beyond their means.  There are going to be big cuts to everything no matter what.  The Greeks want a debt cut.  The Greek Finance Minister says he’d rather “cut off his arm” than sign a bailout deal without a debt cut.  Now, folks in Spain and Italy are telling the IMF they, too, want a debt cut because the debt is unpayable.

Closer to home, Puerto Rico wants to file bankruptcy using something called “Chapter 9.”   This US territory is $75 billion in debt with a population of only 3.5 million people.  How reckless and irresponsible is the leadership there?  You mean they did not know they were heading for trouble five years ago?  How about two years ago?  You mean all of a sudden they can’t pay and “poof.”  This is what happens when you run out of other people’s money.

More phony jobs numbers were produced by the government this week in the ongoing so-called recovery story.  The MSM always focuses on the jobs created but fails to tell you they are part- time jobs or more than 400,000 just left the work force.  5.3% unemployment with 93.6 million no longer in the workforce.  That’s a recovery?  NOT.

From coast to coast, there is either too much water or not nearly enough.  Let’s start in California.  It is ground zero in in the western drought.  All of California is in some sort of drought.  Most of California has never seen a drought this bad.  This is a state of 38 million people, and about four months ago, NASA estimated that California had about a year’s worth of water left–8 months and counting, folks.  Here in the Midwest, there is too much water, way too much water.  Missouri and other states had record breaking rainfall amounts.