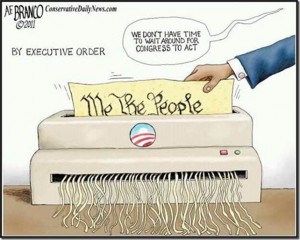 Ever since the original Patriot Act was passed by Congress in 2001, American civil liberties have steadily shrunk and government control has steadily grown.  In a financial crisis, your bank or brokerage can severely restrict the amount of money you can withdraw from your accounts.  The government can now assassinate so-called terrorists anywhere in the world, including on U.S. soil.    Think Anwar al-Awlaki, the American-born radical Muslim cleric who was assassinated by a U.S. drone strike in September.

It can also indefinitely detain suspected terrorists without charge or due process, all thanks to the National Defense Authorization Act recently signed into law by the President.  The government can shut down a website anywhere in the world without due process, just ask Megaupload owner Kim Dotcom from New Zealand.  (Yes, that’s his real name.)

As of last Friday, President Obama has authorized the government to take just about whatever it needs in the name of national defense.   It is an Executive Order appropriately called “National Defense Resources Preparedness (NDRP).”  This allows members of Obama’s Cabinet to take resources such as livestock, water, fuel, farm equipment, vehicles, planes, boats, food and just about anything the government thinks it needs for “defense preparedness.”   I am just skimming the surface here as there are many more details in the order.  (Click here for the complete Executive Order — National Defense Resources Preparedness – NDRP.)  Many are calling this a setup for peacetime martial law.  After reading the Executive Order, I don’t see how anyone could disagree with this statement.

My question is why?  If all that happened was an extension of the Patriot Act in 2011, I might not worry that much (although, Congress basically traded liberty for so-called security.)   But when you look at several of the government’s big power grabbing moves, you can’t help but ask what are they getting ready for?  Is it a Middle East war that will probably turn into world war?  Is it another financial meltdown worse than the one in 2008?  Or, is it all of the above?

On the war question, I have written many posts that say war is a “when” not an “if” scenario.  Just last week, Israeli Prime Minister Benjamin Netanyahu said he did not need the approval of the U.S. to attack Iran.  Iran has said it has the right to strike first if it feels necessary.  Now, there are reports of Russian troops landing in Syria.  The U.N. calls this development a “bomb.”  The world hasn’t been this close to a global war since the late 1930’s.  War would plunge the world into a deep depression so fast that many could be wiped out financially literally overnight.

Another financial meltdown is not just probable but highly likely.  In my opinion, and many other experts, another financial crash is also a question of “when” and not “if.”  The Fed pumped out $16 trillion in the wake of the last meltdown, and it has frozen interest rates at near 0% through 2014.  Talk of a so-called “recovery” is preposterous with a record 46.5 million Americans on food stamps and declining home values despite near record low mortgage rates.  Sure, the stock market has doubled since 2009, but it was cut in half after the 2008 meltdown.  How is anyone making money?  Charles Biderman of the Wall Street research firm “Trim Tabs” recently said,  the increase in stocks came mainly from trillions of dollars of new money printed by the Fed.  (Click here to hear Mr. Biderman.)  Shouldn’t this have fixed the economy?  Shouldn’t the banks be able to go back to “mark to market” accounting and not value real estate and mortgage-backed securities at whatever the bankers think they will fetch in the distant future?  No way is that going to happen because nothing is fixed from the last meltdown.  The failing economy was just papered over with trillions of freshly printed dollars.

Economist Dr. Marc Faber of Gloomdoomandboom.com agrees the economy has been propped up by money printing, but that will not stop a financial crash forever.  In a recent interview, he said, “. . . I think eventually the financial system will be an MF Global where you don’t get your money back from the banks and the investment banks and from the mutual funds and so forth and so on. And, so I think everybody has to think to himself, how do I protect myself against such a black swan event.”  (Click here for the complete interview from ChrisMartenson.com)  Dr. Faber is recommending physical gold and silver as portfolio insurance.  (FYI, Faber also recommended buying stocks in 2009, at the very bottom of the last financial meltdown.)

The stock market is not the only part of the economy facing a crash.  Star banking analyst Meredith Whitney says there is a “tidal wave” of municipal bond defaults coming.  Moneynews.com reported last week, “In late 2010, Whitney told 60 Minutes that municipal defaults could run up into the hundreds of billions of dollars although that hasn’t happened. Maybe not officially, but insolvency is a deepening problem, and defaults are still on the way. . . . So there’s been every effort on the part of the states to prevent this tidal wave of defaults, which is going to happen sooner or later. It’s happening at an accelerating pace. . . .You’re either willing to see it or you’ll shut your eyes, and if people want to tell me, ‘Oh, I was wrong,’ because this hasn’t played out, stay tuned.”  (Click here for more on the story.)

I’m betting Ms. Whitney is right, and I think the government is betting the same way.  Maybe our leaders feel they have to make all of these liberty killing moves to maintain the union in a financial catastrophe?  Maybe the government sees an ominous world war on the horizon?  Whatever it sees, it is definitely not good times ahead, and it can’t be that far away.  The moves the government has made are not for liberty and freedom–it’s all about control.