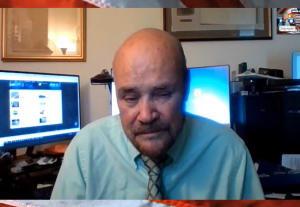 Legendary financial and geopolitical cycle analyst Martin Armstrong said just before the 2022 midterm elections that voter fraud and cheating will set up a very troubling 2023.  Armstrong is predicting “a major turning point in January of 2023.”  Armstrong explains, “The computer (Socrates program) is showing that January is going to be the major turning point for the entire year of 2023. . . . The currencies are rallying against the dollar, and that should go into early January and then after that, this thing looks like death warmed over.  Perhaps it is the insanity of handing Patriot missiles over to Ukraine.  I know Ukraine very well, and I am telling you they will use them offensively and not defensively.  They will use them to attack Russia.  Their whole objective is to expand the war.”

Armstrong says Biden Administration economy killing policies will, “. . .only increase inflation, and this is an endless nightmare.  In all honesty, I hope the Republicans move to impeach Biden.  I am not even sure Biden is aware of all the things taking place.  It is the people behind him that are doing this.  They are the ones writing these agendas, and they are a bunch of climate zealots, and they have no idea what they are doing. . . . This is getting to be insane, and I think you are going to see that January is going to be a very, very big turning point . . . with the Republicans in the House, they will probably start impeachment proceedings and a lot more investigations.”

Armstrong thinks, “The U.S. dollar will be going up . . . Gold and all other tangible assets will also go up in value” right along with “interest rates and inflation going up” too.

On the political front, Armstrong says keep your eyes on Arizona and the 2022 midterm election lawsuits going on now.  Armstrong contends if widespread cheating is proven, “Basically, if it is exposed in one state, then people are going to assume election cheating is all over.  It will be like a contagion or like the flu.  If it’s in one place, everybody is going to get it.  This is simply the way it is.  There is no election that is never rigged.  The question is if the rigging is good enough to actually change the outcome.”

With the possibility of a wider Ukraine war, world wide social unrest, extreme inflation and election fraud in 2022, how is America going to fare?  Armstrong says, “Our computers say nobody will believe the elections.  This is what our computers show.  We are moving into total political chaos.  This is the fall of the United States.  Our Republican form of government does not work.  It is too susceptible to bribery. . . . I would like the tree to fall in the right direction and we have a real actual democracy.  We don’t live in democracies.  That’s all propaganda.  A democracy would be if we decide to go to war in Russia and Ukraine and not somebody in Biden’s Administration.  The people never go for war, it’s always the leaders that go for war.”

There is much more in this in-depth 1-hour and 2-minute interview.

Join Greg Hunter of USAWatchdog.com as he goes One-on-One with Martin Armstrong, cycle expert and author of the new book “The Plot to Seize Russia,” for 12.17.22.

Armstrong’s book, “The Plot to Seize Russia,” is currently sold out but a second edition is being printed.  There will be a book buying link posted soon on ArmstrongEconomics.com.  So, be on the lookout.