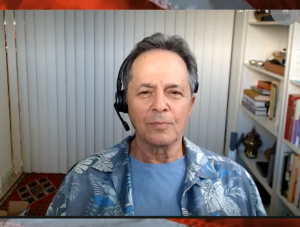 Analyst, professional trader and financial writer Rick Ackerman says buckle up because Bitcoin is going to go much higher in price. Elon Musk is the latest in a line of billionaire investors that have bought the crypto currency that is now in the mid $40,000 range per unit. Ackerman says, “Bitcoin is pure speculation, and we are in a phase right now where the big players absolutely know they can’t lose. Just buy it now and announce in four weeks, six week or two months that they bought it, and it just keeps going up. . . . I don’t think there is an upper limit there really because it’s a pure speculation in a vehicle that is not constrained by earnings, multiples, real products or real service. Bitcoin is a complete abstraction. It’s just a speculation. . . . You might say there is a bit of a mismatch to this big dynamic vertical move in Bitcoin that is happening and whatever time remains to distribute it all to the rubes. In order to allocate all the Bitcoin they are acquiring right now to the rubes, they are going to have to have a way to allocate it fractionally. . . . When Bitcoin gets to a million dollars per coin, who are the buyers going to be?”

The rate on the 10-year Treasury spent most of 2020 stuck around .6%. The 10-year Treasury has now doubled, which is a huge percentage gain for a relatively short amount of time. Ackerman sees the trend for interest rates rising, but he warns it’s not going to take much more of a rise in rates for the Fed to lose control. Ackerman predicts, “Everybody knows the Fed is run by a bunch of charlatans, and they are making it up as they go along. They are in control of nothing really except asset inflation, and that’s going out of control too. Where do interest rates have to be before you can say the Fed is losing control? I can give you an exact number for that. The number on a 10-year note is 1.267%. . . . When the 10-year rate goes above that number, we are going to have what I call an ‘impulsive move’ on a daily chart. What that implies is any move down is going to be corrective, pursuant to another move up. . . . Once that happens . . . the Fed is going to be out of control above that number. . . . The dollar is going to strengthen, and the thing that nobody on planet earth wants is a strong dollar. . . . The last thing that anyone who owes dollars needs is a strong dollar.”

There is $2 quadrillion in the derivative market alone, not to mention tanking commercial real estate and underwater pension plans. In short, Ackerman contends there is an enormous amount of debt that simply cannot and will not ever be repaid. This is also why Ackerman says he’s counting on massive deflation long term, and that means debt destruction and asset destruction.

Ackerman says, “All the speculative energy that would have pushed gold up to $2,500 to $3,000 range by now is all getting pushed instead into Bitcoin. Gold is basically saying, okay have your little fling. . . . I see gold and silver are biding their time, and they are fine. . . . Gold and silver are in arrested bull markets. . . . I think, in time, they will confidently reassert themselves in a hierarchy of assets. . . . They will always hold their purchasing power relative to any other class of assets you can imagine.”

What should the little guy invest in? Ackerman likes cash, physical gold & silver and owning your assets, including your home and your vehicle. These are the things that will survive the coming asset destroying event of massive deflation according to Ackerman.

Join Greg Hunter of USAWatchdog.com as he goes One-on-One with analyst and trader Rick Ackerman.

There is free information and original analysis on RickAckerman.com.

To get much more, you can become a subscriber. There is a two-week trial on the front page of RickAckerman.com that will cost you $1.