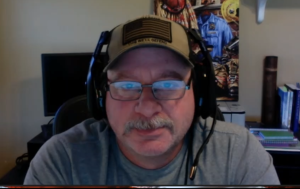 The experts, doctors and data overwhelmingly show that the CV19 injections are dangerous and harmful.  VAERS (Vaccine Adverse Event Reporting System) alone shows more CV19 vax deaths than all vaccines combined in the last 30 years of reporting.  Taylor goes on to say, “Now we are coming to a point that if something is not done quickly, Trump is in trouble.  I am not going to lie.  He’s in trouble because the patriots are not happy.  The problem I am seeing that the Lord is showing me is that as many people as he is winning on the left, he’s losing his base on the right because of the vaccines.  Nobody looks at Biden as Commander in Chief, come on.  Everybody knows the election was stolen.  We know Trump is the President.  The patriots look at Trump as their Commander in Chief.  What they are confused about right now is why is Trump pushing a New World Order agenda?  They can’t figure out why.  I talk to the patriots. . . . There are some patriots out there who are refusing to support President Trump unless he backs off the vaccines. . . . This is the problem when you have demonic advisors.”

What has to be done? Taylor says, “There has to be a shift in the advisory role around the President. . . . . The President was led astray, and he has got to come out and get ahead of this narrative now before it’s too late.  He’s kind of painted himself in a corner and saying he’s the ‘Father of the Vaccine,’ and he’s proud of it.  He says people don’t trust Joe Biden, and he thinks he can talk people into it.  NO, NO that’s not what needs to take place.  What needs to take place is the cancellation of the vaccines immediately.  Stop the shots, stop them now.”

In closing, Taylor says, “It’s all about spiritual and political advisors right now, and this is what God is talking about.  Judgment is going to fall on these advisors.  It’s not going to fall on President Trump because we know he’s been led astray. . . . In ancient times, if an advisor led a King astray, they got executed.  What makes this any different?  If an advisor calls down a curse on a King or a spiritual advisor leads him astray, it’s all treason.  It’s political and spiritual treason.”

Mark Taylor says we need to pray for President Trump to make the right choice and change his advisors.

Join Greg Hunter of USAWatchdog.com as he goes One-on-One with retired firefighter Mark Taylor, author of the popular book “The Trump Prophecies.”

You can follow Mark Taylor on social media in the links below: