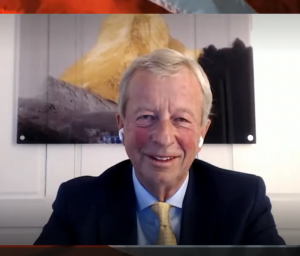 Financial and precious metals expert Egon von Greyerz (EvG) stores gold for clients at the biggest gold vault in the world buried deep in the Swiss Alps.  This year, EvG’s company, Matterhorn Asset Management, has seen “a major inflow, a massive inflow of big amounts of gold” being vaulted by his wealthy clients.  Why the big spike in people wanting physical gold?  EvG says, “You have seen this year incredible money creation around the world by central banks along with the massive debt increases.  You are looking at . . . the money supply, which has been going up for 50 years, but now . . . it’s going up in a straight line.  So, we are now entering into the exponential phase of this financial system.  We are seeing unlimited money printing, helicopter money like Ben Bernanke (former Fed Head) called it.  Then we are going to see accelerated debasement of the currency.  The real moves in gold and silver haven’t started yet.”

This next move, according to EvG, is going to be a global phenomenon.  EvG explains, “The bond market is going to collapse, and interest rates are going to go a lot higher.  Inflation is going to go a lot higher, and, eventually, the currency collapses, and it is a collapsing currency that leads to hyperinflation.  When the currency falls, we will see hyperinflation. . . .  The next group of people that are going to come into this are the institutional investors.  We’ve already seen signs of that. . . . The risk I would say is the highest ever in history.  You have never had a situation in history where basically every country in the world is in the same position.  In the past, you have had individual countries that have had problems, economic collapse and hyperinflation.  You have never had a situation where the whole world has had an insoluble debt problem.  That is now about to collapse.  That’s never happened in history, and that’s why it’s going to be on a much bigger scale than before.  I am not a prophet of doom and gloom.  I am just someone who analyzes risk, and I say it is inevitable.  This has to happen.  It’s not a question of when, it’s just a question of how long will it take.”

What also has to happen are dramatically higher gold and silver prices?  EvG says, “Silver at $25 per ounce is incredibly cheap.  In my view, silver is going to go to at least $600 per ounce. . . .  Gold should be at least $10,000 per ounce right now. . . . Gold should be $20,000 per ounce on an inflation adjusted basis. . . . When gold is $100,000 or $100 million (per ounce) or whatever it reaches, then everyone is going to be talking about gold.  Gold is going to reach an ultimate peak, but that depends on the amount of money printed. . . . America has had a budget deficit for 90 years.  What’s your forecast?  It’s so easy.  It’s going to get worse because now you are getting into the crisis situation.  That’s why it’s going to accelerate. . . . Nobody can believe these forecasts of gold and silver.  People just like to extrapolate a few percent a year.  That’s not where we are now.  We are not at a point now where it’s going to happen gradually.  We are at the exponential point, and the super exponential point of money printing, deficit and of currency collapse.  That’s why this will be reflected in the precious metals prices.”

Join Greg Hunter of USAWatchdog.com as he goes One-on-One with Egon von Greyerz of Matterhorn Asset Management which can be found on GoldSwitzerland.com.

There is free information, analysis and original articles written by EvG on GoldSwitzerland.com.