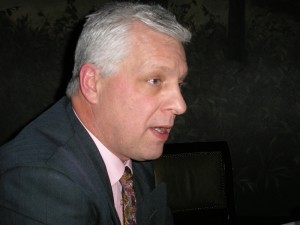 Financial writer and former international derivatives broker Rob Kirby thinks the Fed’s recent cut back in money printing or “taper” is a con game.  Kirby says, “The threat of taper made rates go up.  The actual taper has made the 10-year Treasury drop 40 basis points in less than a month.  The notion that the taper had anything to do with interest rates going higher seems to be a non-story.”  The Fed has long claimed it was buying bonds to hold down interest rates, but if that is not true, what was the Fed doing buying all of those so-called toxic mortgage bonds from the big banks?  Kirby says, “My thesis about taper is that the banks in the U.S. had mortgage bonds on their books probably close to the tune of a trillion dollars that they could not sell to anyone.  It was dead money, and they had to write them off somehow.  The problem with writing off close to a trillion dollars’ worth of mortgage bonds that were held in all the U.S. banks is that kind of money is probably more than the total market capitalization of the U.S. banking industry.  So, they had to figure a way to get those mortgage bonds off the books of the banks and silo them somewhere without basically admitting that the U.S. banking system was insolvent.”  Kirby goes on to say, “For the most part, with them now tapering, we can almost say mission accomplished.  They’ve taken these mortgage bonds off the books of the banks, and they are held right now on the balance sheet of the Federal Reserve.”

According to Kirby, the Fed almost always deceives the public.  Kirby claims, “Everything they tell us is a lie.  These people preach they are about transparency, but everything they do is sleight of hand, misdirection and a shell game.”  One thing the Fed cannot lie about is the size of its balance sheet–now $4 trillion.  Did the Fed swallow a mortgage bond poison pill?  Kirby says, “A lot of people would say, due to the size of the Fed’s balance sheet, there really are questions about their solvency going forward . . . usually, when you see a central bank expand the balance sheet the Federal Reserve has, what manifests out of that is a rapid increase in the money supply . . . typically, you might see something like a hyperinflation or the seeds of hyperinflation . . . that hasn’t happened—yet!   Kirby worries about the toxic mortgage bonds the Fed is now holding.  Kirby says, “That represents potential . . . call it stored up kinetic energy, it is potential for a rapid, rapid, rapid increase in money supply. . . . What it is in its purest form is monetary debasement, and when you have that much monetary debasement, you are going to see nominal prices increase, and it is just a matter of how long that works through the system, but it will occur.”

What is happening now in the economy is not recovery but “financial war.”  Kirby explains, “What we’re witnessing and experiencing is a war between the keepers of the fiat system . . . and foreigners who have lost confidence in the U.S. dollar and confidence, for the most part, in fiat money.  This is why all the emerging countries, China, Russia and the Asian countries are all buying gold.  Isn’t it interesting, just as physical gold problems have started to manifest themselves with people having problems not being able to get the gold they want, Germany not being able to get their gold back. . . Isn’t it interesting, we have had an emerging market currency crisis rear its head in the last two weeks?  The most adversely affected countries are either buying gold or facilitating trade in gold.  If you want to put an umbrella over what we are talking about, it is economic warfare.”

When I asked Rob Kirby if the U.S. can have a strong dollar and suppressed interest rates, Kirby said, “Oh yes, you can.  You just engineer a crisis in emerging market currencies.  This way, you can have your cake and eat it too.”  Kirby says, “Emerging markets are going to be starving for liquidity, and the cost of liquidity might just be gold.”  Of course, Kirby says the current situation “cannot last.”