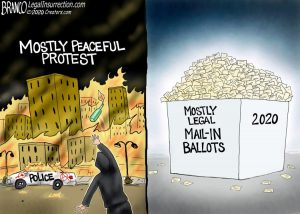 President Trump dropped a bomb this week on election fraud. He said the election machine and software company called Dominion “Deleted 2.7 million Trump Votes nationwide. Data analysis finds 221,000 Pennsylvania votes switched from President Trump to Biden.” If this is proven, and I think it will be, this would shut down Biden and the election would be Trump’s along with the GOP.

Top Trump election attorney Lin Wood, who got millions of dollars from mainstream media outlets (MSM) such as CNN for defaming Nick Sandman, tweeted out “Soon no objective fair minded person would be able to deny massive voter fraud perpetrated in planned coordinated scheme to steal our Presidency. . . . They have all been caught.” On the law, Wood is good, and he would not make such statements on Twitter if he did not already have a darn good provable case.

Of course, the MSM is ignoring any news of massive voter fraud, which is now in abundance.
The MSM is not going to give up the con job that the “Pretender in Chief,” Joe Biden, actually won this election. Biden and his fellow Democrats got creamed, and this is with massive voter fraud that is now apparent in multiple states.

Geo-political and economic cycle expert Martin Armstrong will be the guest for the Saturday Night Post.