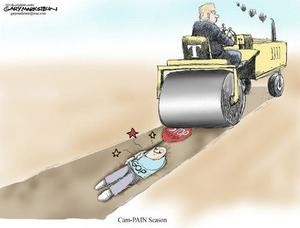 The mainstream media (MSM) is at it again, this time trying to trash Trump on a big primary day.  It didn’t work because trump won just about every contest.  The MSM also tried to bolster Hillary Clinton.  USA Today was particularly blatantly unfair and biased.  This is nothing more than telling people how to vote and the USA Today trying to thought shape and distort the election process for its political criminal cronies. When this happens, it is not journalism, and USA Today ceases being a bona fide news organization. You have to be fair and objective to call yourself a news organization, and the front page of the USA Today on the second so called “Super Tuesday” of the 2016 election cycle was anything but fair and objective. It is outrageous that anyone calling themselves a journalist would do this, and that means top management of USA Today, in my view, is either stupid or corrupt. I do not think they are stupid.

Russia is pulling some troops out of Syria. Many are hopeful this will signal an end to hostilities. Many are also thinking this will put pressure on the Assad regime to cut a peace deal. The Free Syrian Army, Al Qaeda, ISIS and the U.S., on the other side of the conflict, are dreaming if they think Russia is going to turn over Syria to ISIS and lose its new air base or give up its strategic port in Tartus. The Russians turned the tide of war in Syria with a surge in military power just like the U.S. did in Afghanistan. This is simply a cost cutting measure, and Russia says, if need be, it can send back troops quickly.

The Fed came out this week and surprise, surprise, it’s not going to raise interest rates. Why not hike rates? After all, it’s been harping that the economy was getting stronger. The simple answer is the economy is not getting stronger. It’s clearly getting weaker. Greg Mannarino of TradersChoice.net says this is really a “no confidence vote in the economy.” Mannarino also contends, “Gold is going up and so is the stock market—for now.” Mannarino says, “The market will top soon, and gold is going to the moon. All the global central banks are doing, at this point, is financing bankrupt governments.”

USA Today did not return multiple calls for comment, including calls to top management.