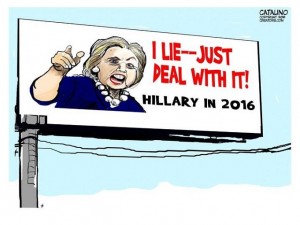 Attorney General Loretta Lynch, along with the FBI, is investigating the biggest political scandal in American history with Presidential presumptive nominee Hillary Clinton. Allegations include:  a private server that jeopardized national security, charity fraud and bribes paid in donations for favors from Clinton while she was Secretary of State.  Against that backdrop, Lynch took a private meeting with Mrs. Clinton’s husband, former President Bill Clinton, on Lynch’s private jet in Phoenix.  We are supposed to believe this was a chance meeting, and we are also supposed to believe they talked about golf and grand babies.  That is preposterous, and I think somebody called a meeting.  It was so important that Lynch put her reputation and credibility on the line.  This was a powerful meeting, and it is impossible to believe that they talked about grand babies and golf when the most explosive political case in U.S. history hangs in the balance in an ongoing FBI criminal investigation.

The 800 page Benghazi report is out, and we find out that a rescue mission was never launched. We also see the mainstream media will not cover the case and not show presidential candidate Hillary Clinton lied about the cause of the attack that murdered four Americans.  She told America and the victims’ families the cause was outrage about an internet video that insulted Islam.  She knew, the night of the attacks, that it was a terror attack by Islamic terrorists and yet lied to save her legacy as Secretary of State.  The biggest thing that did not come out in the report is how the Clinton State Department was knowingly allowing gun running to ISIS terrorists in Syria.

The most dangerous bank in the global financial system is Germany’s Deutsche Bank. The stock price is at 30 year lows, and it failed the most recent Fed stress test.  Other banks that did well in the test are now allowed to buy back their own stock with money they got for free from the Federal Reserve.  Gregory Mannarino from TradersChoice.net says this is a “backdoor bailout” that helps enrich bankers and keeps the financial system going a little longer.  Instead of loaning money to businesses to create jobs, Mannarino says they are inflating the stock prices of the banks and turning their backs on helping the overall economy.