Home
»
Weekly News Wrap-Ups
»
US and Russia Close to War, Global Economy on Brink of Collapse, NBC Biased for Clinton 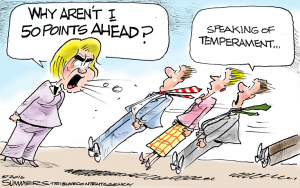 The United States is reportedly suspending diplomacy with Russia, and it also says it’s preparing military options in Syria. The U.S. has asked Russia to stop its bombing campaign in Syria, and Russia will not agree to do so.  State Department spokesman John Kirby says, “More Russian lives will be lost, and more Russian aircraft will be shot down.”  This is a serious escalation between Washington and the Kremlin, and the only outcome to this is a wider war in Syria that could mean an eventual global war between America and Russia that would, no doubt, involve all allies as well.

Deutsche Bank (DB), that was deemed the “most systemically dangerous bank” by the IMF this year, is in big trouble. Depositors and hedge funds have been pulling money out of the bank, and the stock price is falling like a stone.  Deutsche Bank shares fell nearly 6.7% on Thursday, and Wall Street sold off.  Now, there are rumors that Germany will have to step, in but that is politically dicey and by no means guaranteed.  DB has been compared to Lehman Brothers, which many say started the 2008 financial meltdown.  DB is much larger and way more leveraged than Lehman was in the last financial calamity.  Many other banks, especially in Europe, are plagued with big solvency problems and liquidity problems.  DB could be the first very big domino that starts a chain of defaults.

The mainstream media (MSM) says Hillary Clinton won the first Presidential debate over Republican Donald Trump. The overwhelming percentage of online polls say it was Trump who was the big winner.  This is despite the fact that NBC’s Lester Holt interrupted Trump more than 40 times, while interrupting Clinton only 7 times.  Also, big subjects embarrassing to Clinton were omitted from the debate such as the Clinton Foundation, which many call a global charity fraud, and the email scandal, where Clinton told many lies and jeopardized national security.

Top trends researcher Gerald Celente will the guest on the “Early Sunday Release.” He says get ready for more than one surprise in the month of October.  Celente lays out what the “October surprises” could be in the upcoming interview Sunday on USAWatchdog.com.