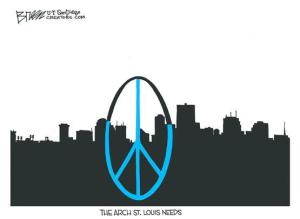 I told you last week there would be no charges for the police officer who shot and killed Michael Brown, and no charges were brought. Of course, there was rioting and violence, and that seems to be what was wanted.   The Governor of Missouri did not deploy the National Guard, and things got out of control.  Was it done on purpose?  One thing is for sure, this is NOT about race.  The Obama Administration wants it to be; otherwise, he would not have sent Al Sharpton to Ferguson.  This is about a very bad economy and an economy that is going to get much worse.  Ferguson and all the protests around the country are a distraction.  The undertone of the protesters’ narrative is that white people and white police are hunting down black men and killing them.  This is outrageous and totally unsupported by fact.  Statistically speaking, America does not have a white on black crime problem.  Only 7.6% of blacks are killed by whites.  Only 14% of whites are killed by blacks.  Former NYC Mayor Rudolf Giuliani said on Meet the Press that 93% of black people are killed by other black people.   Likewise, about 83% of whites are killed by white people.  Nowhere in the country is the black on black murder problem more obvious than in Chicago.  Hundreds of young black men every year are killed in Chicago by blacks.  Since Michael Brown died in August, more than 100 black men have been shot and killed in Chicago.

What is Ferguson really about? Again, it’s cover for a bad economy and an economy that is going to get much worse.  Sure, the third quarter GDP was just revised up to a 3.9% growth rate.  I called economist John Williams about this, and he told me that is simply spin and not true.  We also just got bad consumer confidence numbers, a spike in unemployment claims and a big drop in PMI numbers.

You want more proof the economy is headed down? Look no further than Democratic Senator Chuck Schumer.  He just said the Democrats made a “mistake” in voting for Obama Care.  He said, “We blew it,” and said Democrats should have focused on the economy.  Does that sound like the economy is going to be getting better?  Also, didn’t I say right after the midterm elections that Democrats would run against Obama and his policies?  You know who is up for re-election in 2016?  Chuck Schumer.  And doesn’t he sound like he is throwing President Obama and his policies under the bus?  Just as I predicted.

If you need more proof the economy is going to get worse, then look no further than Obama Care and rising insurance premiums. And, just wait until the employer mandate kicks in next year.  It is the job killer everyone has warned you about.  Speaking of jobs, the youth unemployment rate in the black community is nearly 25%.  Blacks in general are unemployed at twice the rate of whites.  John Williams says the sub 6% unemployment rate is a big fat lie.  The real rate is hovering around 23% for years.  A buck an hour raise at a fast food restaurant and a 29 hour work week with zero overtime is not going to really help anyone, especially the minority communities like Ferguson.   Ask yourself this, if the economy was really growing at a 3.9% rate, would we have nearly 93 million people not in the work force?  Would we have 47 million on food stamps?  Would we have 14 million on disability?  The economy is not in a so-called recovery and the Democrats know it–and so does the Obama Administration.  This is what Ferguson and the protests around the country are about.  This is all about “look over here” and not at the real problem, a stinking and sinking economy for Main Street.

They have extended the negotiations, once again, for Iran and the nuclear deal the west has been working on for years. It will be another seven months before the next expiration date.  Iran has said repeatedly it will not curtail its program.  Here are some really the big questions:  Will Saudi Arabia and all the other Sunni nations sit and wait?  Is Israel going to sit and wait?  Those are two very big Middle East wild cards, and I think we get an answer sometime next year.

Finally, there is gold and news that more countries want theirs back. The Dutch just repatriated 122 tons.  The leading French candidate in upcoming elections says France should get its gold back.  The Swiss are voting this weekend to get their gold back inside its borders.  Why all the attention to getting control of physical gold?  Could it be central banks don’t trust each other’s paper?  If paper assets devalue or default, would having gold in your possession be a good idea?  Countries wanting physical is not a good indication that the global economy is good; and, in fact, it is signaling that it might be getting ready to tank.