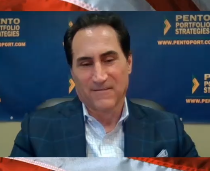 Money manager and economist Michael Pento warns the era of super low Fed manipulated interest rates is coming to an end.  This is big trouble to the bond market and the overall economy.  Pento explains, “I think what’s happening now is about 35 years of government manipulation of markets is about to end.  The faith that we have in our government and the faith that we have in our central banks is coming to an end.  As evidence of that, the 7-year note auction was the worst auction in U.S. history. . . . It just goes to show you the faith in our bond market is eroding.”

Now, we are facing multiple bubbles as opposed to just the sub-prime crisis in 2007-2008.  Pento points out, “So, we have another bubble in real estate, but back in 2007, all we had was a bubble in real estate.  We really didn’t have a massive bubble in the stock market.  The total market cap to GDP was only 100% back in 2007.  Now, it’s 191% of GDP, and, of course, you have a massive bubble in the bond market.  You have $15 trillion in negative yielding sovereign debt and a U.S. Treasury at .3% in March of 2020.  So, we have a triumvirate of bubbles that are all held together by this artificially low interest rate.  Here’s the catch 22. . . . We are sending more checks to people, $1,400 checks in Biden’s Covid relief package.  So, we are monetizing debt.  We are creating inflation.  If you continue to print money, borrow money and monetize that debt, inflation is going to wax higher and higher.  You are going to blow up the bond market.  If you blow up the bond market, you will blow up high yield, you will blow up credit, you will blow up the real estate market and then the stock market.  If they stop, the only buyer of U.S. Treasury bonds . . . is the Federal Reserve.  If they lose the bid of the Fed and it stops printing money and buying . . . rates spike . . . and then you see a massive deflationary bubble from a massive fiscal and monetary cliff.  It’s game over either way, and that’s where we are now.  If you keep printing and keep manipulating markets, you have a bond market crisis.  Stop printing, you have a deflationary crash of asset prices.  That’s it, that’s where we are headed.”

When is this going to come undone?  Pento predicts later this year and points to the third or fourth quarter of 2021.

Pento says, “This is a very fragile economy. . . .When you see the credit market freeze and these zombie companies can’t issue new debt, and borrowing costs go into double digits and companies start closing the doors and laying off people and you get a massive depression that follows . . . what is going to be the solution from the central banks?  . . . . The Fed can’t lower interest rates.  They can only increase QE (money printing).  How do you bail out an inflationary crisis in the bond market by creating more inflation?  That’s the problem.”

Join Greg Hunter of USAWatchdog.com as he goes One-on-One with economist and money manager Michael Pento.