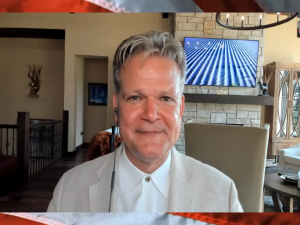 Biblical cycle timing expert, geopolitical and financial analyst Bo Polny has made many spot-on calls in the last few years on USAWatchdog.com.  Just a few include:  Polny predicted a 35% drop in the stop market in early February of 2020, and the next month it crashed 38%.  In late 2020, Polny predicted Roe v. Wade would be overturned, and in June of 2022, the Supreme Court did just that.  Now, Polny has a new prediction based on his Biblical cycle work.  Polny explains, “Everything I have been talking about is at crunch time. What happens in this September?  I don’t know.  How bad will the market crash?  I don’t know.  It could be as little as hitting 20,000 on the DOW.  It could be as great as a 70% to 80% market collapse.  It really does not matter how bad it crashes or what day it crashes.  What matters is the crash will change everything.  It’s going to change everything in the way we see our world.  Our world is about to change. . . . We are living in Biblical times.  We are going to see impossible things happen . . . because God makes the impossible possible.”

Polny’s Biblical calculations point to Rosh Hashanah, September 25th, which is just a few weeks away.  Polny is expecting it to all end up as a full blown “collapse” of the financial system.    Polny explains, “Things are going to change on or about September 25th.  I think we are going to have a crash going right into this date. . . . The financial system is going to shake.  Do not be surprised if you see the banking system shake like you have never seen before.  It will work its way around the world as the sun is rising.  The financial system breaks in Europe and makes its way to the United States.”

Polny says this crash is not being to be welcomed by President Joe Biden and the Democrats.  Polny says, “What is coming in September is the ‘Biden Crash,’ not God’s anointed crash. . . . The kings of the earth are of flesh, and everyone of them are flawed.  The Biden crash is specifically the fall of Babylon. . . . The point is we are about to see the manifestation of the Glory (of God) on this earth.  That will be the fall of the Daniel 2 statue.  That will be the opening of the Third Seal. . . . That will be ‘Babylon, Babylon the great has fallen’ . . . That will be the greatest wealth transfer and the greatest financial event in human history. . . . The Daniel 2 prophecy has predicted the last 2.5 thousand years perfectly. . . . Based on prophecy, it’s all supposed to go down around the 24th or 25th of September. . . . Expect the death of the United States.  The United States we grew up with is about to die. . . . Christ explained that you must die to be born again. . . . So, the ‘Biden Crash’ will be the death of the United States only to be reborn anew under God.”

There is a lot more in the in-depth 1-hour and 16-minute interview.

Join Greg Hunter of USAWatchdog.com as he goes One-on-One with Biblical cycle expert and financial analyst Bo Polny, founder of Gold2020Forecast.com for 9.10.22.

To look at Polny’s free PowerPoint presentation called “All People Will See His Glory 2022.” click here.

If you would like a reduced rate on a 2-week trial on the price moves of “Gold Turn Dates,” click here. (Use discount code USA49)

If you would like a reduced rate for a 2-week trial on the price moves of “Bitcoin Index,” click here. (Use discount code USA49)

(USAWatchdog.com receives no financial compensation from Gold2020Forecast.com.  The discount codes are offered only as a courtesy to USAW visitors.)