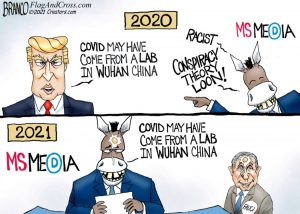 According to the 2008 Nobel Prize winner in medicine, Luc Montagnier, the CV19 vaccines are creating variants or mutations that are resistant to the CV19 vaccine.  He also says that he is following the global vaccination push closely and says he is documenting that the “curve of vaccination is followed by the curve of deaths.”  Montagnier says he is seeing “patients who have become sick with Corona after being vaccinated.”

The mainstream press is already trying to tamp this down by saying Montagnier is an “anti-vaxer” and was misquoted.  I guarantee you he is not misquoted here on USAWatchdog.com.  See for yourself.

Election integrity audits are continuing but are also being vigorously resisted by Democrats in several states.  The mainstream media (MSM), which has become a propaganda arm of Deep State Democrats, are writing one negative story after another.  They are calling the auditors “grifters” and the audits “bogus.”  These are the same organizations who told us the CV19 virus did not come from a lab in China, and now we know, that, too was a propaganda lie.   It all will eventually boil down to the voting machines and the actual ballots.

During the 2020 campaign, Vice President Joe Biden famously said that his tax increase will not be paid by anyone making less than $400,000 a year.  If you consider the inflation rate that is vaulting higher, you know everyone who eats or drives a car is being taxed by inflation.  Now, Biden wants Congress to approve a $6 trillion budget in fiscal 2022.  How’s he going to pay for that?  Tax, tax and more tax on everyone and every company in America.  Another Biden election promise fulfilled.

Join Greg Hunter of USAWatchdog.com as he talks about these stories and more in the Weekly News Wrap-Up for 5.28.21.

Renowned radio host, filmmaker and top selling book author Steve Quayle will be the guest for the “Saturday Night Post.”  He will talk about the federal government’s recent admission about aliens on 60 Minutes and how Antarctica fits into the false story that has started being pitched to the world.