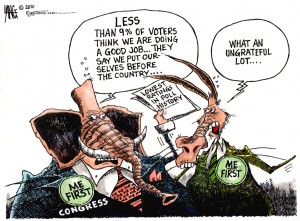 The President is kicking off another new jobs creation campaign this week.  He has just proposed spending more than $50 billion on infrastructure over the next six years and $300 billion in business tax cuts and credits for the future.  The White House says the plan will not add to the record U.S. deficit.  The Obama Administration plans to work with Congress to get it done.  Congress, by the way,  is enjoying a sub 10% approval rating these days.    The Guest Writer today is Paul Craig Roberts.  He was Assistant Treasury Secretary in the Reagan Administration, so he knows something about money and stimulus plans like the President is pushing.   Roberts lays out why stimulus plans will not work for the American economy as it stands today.  –Greg Hunter—

Death By Globalism—Economists Haven’t A Clue

Have economists made themselves irrelevant?  If you have any doubts, have a look at the current issue of the magazine, International Economy,a slick endorsed by former Federal Reserve chairmen Paul Volcker and Alan Greenspan, by Jean-Claude Trichet, president of the European Central Bank, by former Secretary of State George Shultz, and by the New York Times and Washington Post, both of which declare the magazine to be “ahead of the curve.”

The main feature of the current issue is “The Great Stimulus Debate” [PDF] Is the Obama fiscal stimulus helping the economy or hindering it?

Princeton economics professor and New York Timescolumnist Paul Krugman [Email him] and Moody’s Analytics chief economistMark Zandi [Email him] represent the Keynesian view that government deficit spending is needed to lift the economy out of recession. Zandi declares that thanks to the fiscal stimulus, “The economy has made enormous progress since early 2009″[PDF],an opinion shared by the President’s Council of Economic Advisors and the Congressional Budget Office.

The opposite view, associated with Harvard economics professor Robert Barro and with European  economists, such as Francesco Giavazzi and Marco Pagano and the European Central Bank, is that government budget surpluses achieved by cutting government spending spur the economy by reducing the ratio of debt to Gross Domestic Product.

This is the “let them eat cake” school of economics.

Barro says that fiscal stimulus has no effect, because people anticipate the future tax increases implied by government deficits and increase their personal savings to offset the added government debt. Giavazzi and Pagano reason that, since fiscal stimulus does not expand the economy, fiscal austerity consisting of higher taxes and reduced government spending could be the cure for unemployment.

If one overlooks the real world and the need of life for sustenance, one can become engrossed in this debate. However, the minute one looks out the window upon the world, one realizes that cutting Social Security, Medicare, Medicaid, food stamps, and housing subsidies when 15 million Americans have lost jobs, medical coverage, and homes is a certain path to death by starvation, curable diseases, and exposure, and the loss of the productive labor inputs from 15 million people. Although some proponents of this anti-Keynesian policy deny that it results in social upheaval, Gerald Celente’s observation is closer to the mark: “When people have nothing left to lose, they lose it.”

The Krugman Keynesian school is just as deluded.  Neither side in “The Great Stimulus Debate” has a clue that the problem for the U.S. is that a large chunk of U.S. GDP and the jobs, incomes, and careers associated with it, have been moved offshore and given to Chinese, Indians, and others with low wage rates. Profits have soared on Wall Street, while job prospects for the middle class have been eliminated.

The offshoring of American jobs resulted from (1) Wall Street pressures for “higher shareholder returns”, that is, for more profits, and from (2) no-think economists, such as the ones engaged in the debate over fiscal stimulus, who mistakenly associated globalism with free trade instead of with its antithesis—the pursuit of lowest factor cost abroad or absolute advantage, the opposite of comparative advantage, which is the basis for free trade theory. Even Krugman, who has some credentials as a trade theorist, has fallen for the equation of globalism with free trade.

As economists assume, incorrectly according to the latest trade theory by Ralph Gomory and William Baumol,that free trade is always mutually beneficial, economists have failed to examine the devastatingly harmful effects of offshoring. The more intelligent among them who point it out are dismissed as “protectionists.”

The reason fiscal stimulus cannot rescue the U.S. economy has nothing to do with the difference between Barro and Krugman. It has to do with the fact that a large percentage of high-productivity, high-value-added jobs and the middle class incomes and careers associated with them have been given to foreigners. What used to be U.S. GDP is now Chinese, Indian, and other country GDP.

When the jobs have been shipped overseas, fiscal stimulus does not call workers back to work in order to meet the rising consumer demand. If fiscal stimulus has any effect, it stimulates employment in China and India.

The “let them eat cake school” is equally off the mark. As investment, research, development, etc., have been moved offshore, cutting entitlements simply drives the domestic population deeper in the ground. Americans cannot pay their mortgages, car payments, tuition, utility bills, or for that matter, any bill, based on Chinese and Indian pay scales. Therefore, Americans are priced out of the labor market and become dependencies of the federal budget. “Fiscal  consolidation” means writing off large numbers of humans.

During the Great Depression, many wage and salary earners were new members of the labor force arriving from family farms, where many parents and grandparents still supported themselves. When their city jobs disappeared, many could return to the farm.

Today farming is in the hands of agribusiness. There are no farms to which the unemployed can return.

The “let them eat cake school” never mentions the one point in its favor.  The U.S., with all its huffed up power and importance, depends on the U.S. dollar as reserve currency. It is this role of the dollar that allows America to pay for its imports in its own currency.

For a country whose trade is as unbalanced as America’s, this privilege is what keeps the country afloat.

The threats to the dollar’s role are the budget and trade deficits. Both are so large and have accumulated for so long that the prospect of making good on them has evaporated. As I have written for a number of years, the U.S. is so dependent on the dollar as reserve currency that it must have as its main policy goal to preserve that role.

Otherwise, the U.S., an import-dependent country, will be unable to pay for its excess of imports over its exports.

“Fiscal consolidation,” the new term for austerity, could save the dollar. However, unless starvation, homelessness and social upheaval are the goals, the austerity must fall on the military budget.

America cannot afford its multi-trillion dollar wars that serve only to enrich those invested in the armaments industries. The U.S. cannot afford the neoconservative dream of world hegemony and a conquered Middle East open to Israeli colonization.

Is anyone surprised that not a single proponent of the “let them eat cake school” mentions cutting military spending?  Entitlements, despite the fact that they are paid for by earmarked taxes and have been in surplus since the Reagan administration, are always what economists put on the chopping block.

Where do the two schools stand on inflation vs. deflation? We don’t have to worry. Martin Feldstein, [Email him] one of America’s pre-eminent economists, says: “The good news…is that investors should worry about neither.” His explanation epitomizes the insouciance of American economists.

Feldstein says that there cannot be inflation because of the high rate of unemployment and the low rate of capacity utilization. Thus, “there is little upward pressure on wages and prices in the United States.” Moreover, “the recent rise in the value of the dollar relative to the euro and British pound helps by reducing import costs.”

As for deflation, no risk there either. The huge deficits prevent deflation, “so the good news is that the possibility of significant inflation or deflation during the next few years is low on the list of economic risks faced by the U.S. economy and by financial investors.”

What we have in front of us is an unaware economics profession. There may be some initial period of deflation as stock and housing prices decline with the economy, which is headed down and not up.  The deflation will be short lived, because as the government’s deficit rises with the declining economy, the prospect of financing a $2 trillion annual deficit evaporates once individual investors have completed their flight from the stock market into “safe” government bonds, once the hyped Greek, Spanish, and Irish crises have driven investors out of Euros into dollars, and once the banks’ excess reserves created by the bailout have been used up in the purchase of Treasuries.

Then what finances the deficit? Don’t look for an answer from either side of The Great Stimulus Debate. They haven’t a clue—despite the fact that the answer is obvious.

The Federal Reserve will monetize the federal government deficit. The result will be high inflation, possibly hyper-inflation and high unemployment simultaneously.

The no-think economics establishment has no policy response for economic Armageddon, assuming they are even capable of recognizing it.

Economists who have spent their professional lives rationalizing “globalism” as good for America have no idea of the disaster that they have wrought.

Paul Craig Roberts was an Associate Editor of the Wall Street Journal and an Assistant Secretary of the U.S. Treasury during President Reagan’s first term.  His latest book, HOW THE ECONOMY WAS LOST, has just been published by CounterPunch/AK Press.  He can be reached at: [email protected]