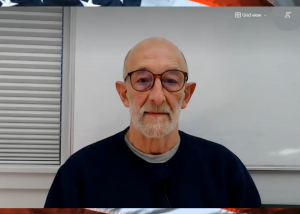 Clif High is an Internet data mining expert who has many well-documented correct forecasts.  High uses something he calls “Predictive Linguistics” and computer programs to sort through billions of bits of information on the Internet to predict future trends and events.  His latest correct forecast was made last month here on USAWatchdog when he said, “The FDA would not approve the Pfizer CV19 vaccine.”  The FDA told the public it was approved, but it only approved a Pfizer vaccine called Comirnaty that Americans cannot get.  Americans are still getting the “experimental” Pfizer version of the so- called vaccine, and Pfizer still has immunity from liability.  It was classic bait and switch and a total deception of the public.

Clif High says, “Deception is their only weapon. . . . They are employing technology to trick us.  They employ bots through all the social media.  They employ scripts in all mainstream media. . . . They have farms of people paid by the CCP with rooms in China and people with 40 different cell phones in front of them with a computer that can feed all those different cell phones.  This is how they establish the persona of large crowds of people that are supposedly agreeing with or putting out the mainstream media talking points or reinforcing those.”

So, is the country evenly split for and against the Biden Administration?  High says, “No.  I can find about 12% of the population that will repeat the talking points and about 6% of the population that will do it consistently on their own unbidden.  6% are in the category of loyalists. Of that 6%, maybe half are true believers. . . . They are attempting to make you think it’s about 80% to 20% in favor of the Deep State.”

What’s the real sentiment in the country?  High estimates, “80% of the people in the country are against all of this at a passionate level.  The intensity of that 80% is ratcheting up.”

High says this is why you are seeing no masks being worn at college football games.  People have had enough.  High says, “You are seeing this at multiple sporting events.  This marker is being used to track the sentiment of people involved in Devolution.”

In short, large segments of the population will be waking up to all the lies and illusions that control their lives.  High talks about the big die-off of people who are “fully vaccinated” and how it is them who will need to be quarantined so they do not harm the unvaccinated public.  The biggest wakeup call will come soon from the economic system.  High says, “These things are coming in chunks, and we are just about at the point where the chunk called the financial system will fall all apart.  The big marker on that is going to be October 1, which is the end of the fiscal year for the federal government.”

High also talks about weapons from Afghanistan coming back home to the USA to arm Antifa and BLM courtesy of China.  High thinks what he calls “normies” will be getting a big cold bucket of water in the face soon, and things will change forever in how the public perceives what is going on in America.  High also talks about Australia and the atrocity that is coming that will make them go wild and fight for liberty.  High talks about all the millions of people who have gotten the shots and will probably die.  It’s going to be so bad that 2022 will be known as the year of the mass die-off.  High also talks about how many more people will wake up to the fact that the “USA was attacked” and that “we have been in an ongoing war.”  High also talk real numbers of people who have actually gotten the shots.  It is way less than the official numbers are saying, but for those people, death is probably coming for them.  Phony inflated vax numbers is one more deception at work, according to High, because “they are selling the death shot.”  High says the only thing that explains what is going on with CV19 and the push for injections is the “Deep State global criminals” are “killing people on purpose to depopulate the planet.”

High gives data and analysis on deflation, gold, silver, Bitcoin, a new U.S. currency as early as January 2022, Ivermectin and vitamins for protection, new side effects for the vax, funeral homes burying record numbers of people than ever, and the Arizona audit and why it is so important to get it perfect.

This is just some of what is covered in this one hour and 13 min interview.

In closing, High says, “This war is deception.  They have no real power.  They only have the power of controlling the mind through deception of words.  They are deceivers.  We have lived in a world of deceit where deceit has been rewarded by them.  We have been inculcated into this world, and it’s changing.  It is the most massive change in 2,780 years.  It is the change of the ages into the age of knowing, and we will know.”

Join Greg Hunter of USAWatchdog.com as he goes One-on-One with data mining expert Clif High, and he gives us an update on future events and trends.

(What is written here is a fraction of what is in this 1 hour and 13 min. interview.