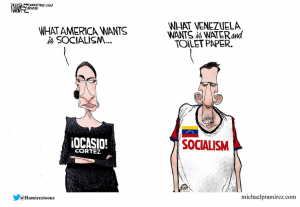 For years, I have been telling you the so-called Progressive/Democrats are nothing more than Marxist/communists. Top Democrats are now admitting this and proving me correct all alone. The Democrat Socialists of America have proudly announced on Twitter this week that “communism is good.” The head of the DNC, Tom Perez, also endorsed the far left Marxist Ocasio-Cortez as “the future of our party.” This is what the Democrats are running on in 2018 and beyond. Maybe that’s why millions of Americans are walking away from the Democrat party.

Russia, China, France, Germany and Russia are getting together to try to salvage the so-called Iran nuke deal to curtail that country’s nuclear weapons ambitions. The entire deal was a total sham from the start because not a single country, including the U.S. and Iran, signed any deal. High ranking Iranians threatened on Twitter to expose the western leaders who took bribes to get this deal done.

From tariffs with China to the flattening yield curve, it looks like the Trump Administration is heading into choppy waters. Now, the interest rate spread between the 10-year Treasury and the 30-year Treasury is a miniscule .11 basis points. That’s a little more than 1/10 of a percent to tie up money for an additional 20 years. Economists say when the yield curve flattens and inverts, look out for a big recession. Gregory Mannarino of TradersChoice.net says the country is on a “countdown to inversion,” and it will be “10 times worse than the Great Depression.”

Join Greg Hunter as he gives his take on these stories and more in the Weekly News Wrap-Up.

(This report will look at the new Marxism in the Democrat Party, look at the rival of the Iran Nuke deal that was a total fraud that nobody signed, and the bad omen of a flattening yield curve.)

Gregory Mannarino of TradersChoice.net will be the guest for the Early Sunday Release.  Mannarino will talk about warning signs of a coming crash.